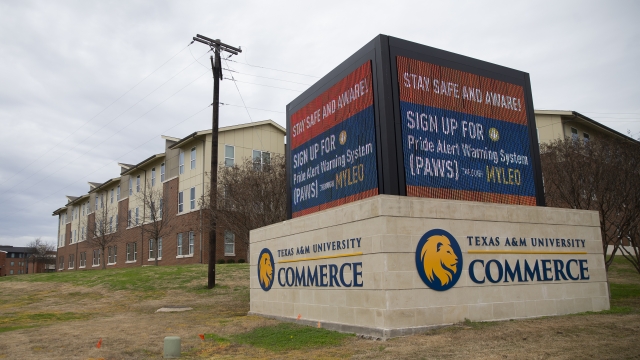 SMS
2 Dead, 1 Injured In Shooting At Texas A&M University-Commerce
By Ahmed Jawadi
By Ahmed Jawadi
February 4, 2020
Police identified the victims on Tuesday: One of the women was a student, and the other woman and child were her sister and nephew.
SHOW TRANSCRIPT

A shooting at Texas A&M University-Commerce on Monday left two women dead and a child injured.

University police said they received a call about a shooting in the Pride Rock residence hall Monday morning. Upon arriving on the scene, police said they found the two women dead and a 2-year-old boy wounded. Police identified the victims on Tuesday, saying one of the women was a freshman at the university, the other was her sister and the 2-year-old was her sister's son. The boy has since been treated for his injuries and was released to family members.

School officials said a suspect has been arrested in connection with the shootings. He is believed to be the ex-boyfriend of one of the women and has been charged with capital murder. Police said the shooting "appears to be a targeted, isolated event," and that the investigation is ongoing.