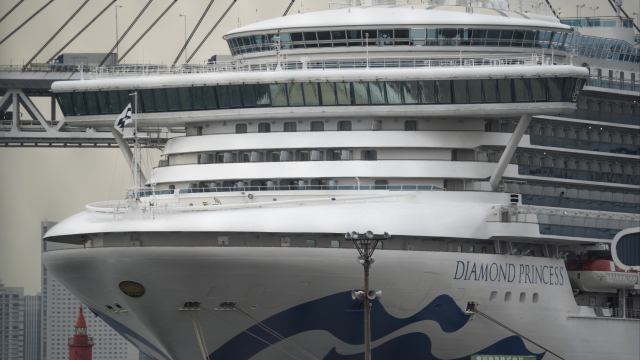 SMS
2 Cruise Passengers Infected With The Coronavirus Have Died
By Katherine Biek
By Katherine Biek
February 20, 2020
The Japanese Health Ministry says the man and the woman were both in their 80s. Both were being treated in hospitals at the time of their deaths.
SHOW TRANSCRIPT

Two Japanese passengers diagnosed with the coronavirus on The Diamond Princess cruise ship have died.

The Japanese Health Ministry says the man and woman were both in their 80s. The man had a preexisting condition of bronchial asthma. Both were being treated in hospitals when they died.

This is the first time anyone who caught the virus on the ship has died. It was put under quarantine in early February after a man who traveled on the ship in January tested positive for the virus.

As of Thursday, more than 630 passengers and crew members have been infected with the coronavirus.

Jan Swartz, the president and CEO of the cruise ship operator Princess Cruises called it "an unprecedented situation" in an interview with CNN.

"Nobody going on vacation thinks that they're going to be notified in the last days that they've got an extension of 14 days and they're not going to be allowed to live in their … leave their cabin. So, our heart breaks for everybody who experienced this situation," Swartz said.

Now that the 14-day quarantine is over, officials are slowly letting people off the ship, so long as they've tested negative for the virus. Everyone who does is expected to disembark by Friday.

But just because they are heading home doesn't mean life immediately returns to normal. Some countries have chosen to implement another mandatory quarantine for their citizens who were on the ship.