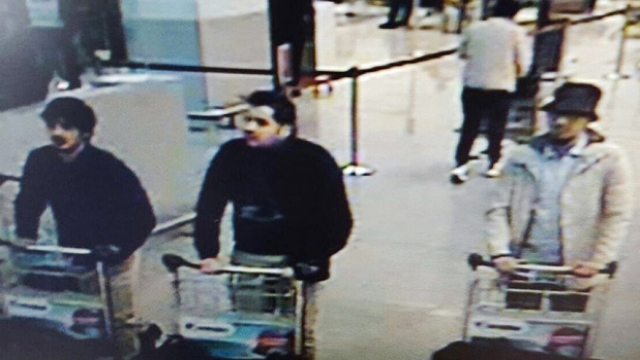 Wednesday morning, police arrested an unnamed suspect in connection with the terror attacks in Brussels and released the names of three other suspects.

They were originally thought to be the men dressed in black in this image taken at the Brussels airport. But now, authorities say one of the brothers was at the Maalbeek subway station that was also attacked. The man in lighter-colored clothing is believed to have placed a bomb at the airport and left.

Belgian media reported early Wednesday the man, identified as Najim Laachraoui, was arrested. But soon after, many outlets withdrew that report, saying the man detained had been misidentified.

Laachraoui is a suspected accomplice in November's Paris attacks as well. His DNA was reportedly found in several houses used in the suspected terrorist network.

Authorities were reportedly aware of the El Bakraoui brothers, but they were on police's radar for organized crime, not terrorism.

Investigators are currently analyzing the bombs used in Brussels to see if there's a connection to those used in the November Paris attacks. A Belgian prosecutor's update puts the Brussels attacks' toll at 31 dead and 270 injured.

This video includes clips from Sky News and images from Belgian Federal Police and Getty Images.