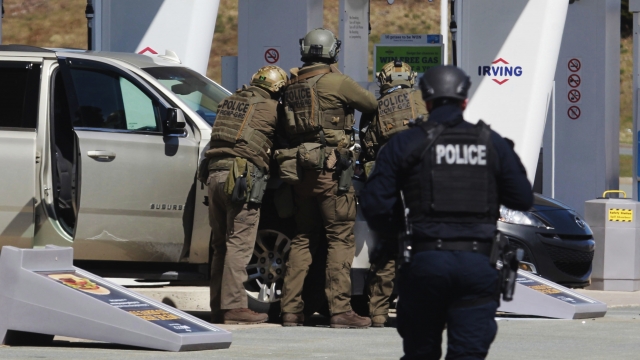 SMS
18 Killed In Mass Shooting, Deadliest In Canadian History
By Gage Jackson
By Gage Jackson
April 20, 2020
A man disguised as a police officer opened fire on numerous homes after leading police on a "chaotic" chase across the northern part of Nova Scotia.
SHOW TRANSCRIPT

At least eighteen people, including a police officer, were shot and killed in Nova Scotia over the weekend in the deadliest shooting in Canadian history. The 51-year-old gunman, who was disguised in a police uniform, was also pronounced dead at the scene.

The police officer who was shot and killed was identified as Constable Heidi Stevenson. She was a 23-year police veteran and mother of two.

The shooting began Saturday night in the small town of Portapique when officers responded to reports of shots fired. As authorities arrived, a chase ensued across the northern part of the province and didn't end until early Sunday morning. Numerous houses were also set on fire.

Residents in the area were already on lockdown due to the coronavirus pandemic when officers suddenly alerted them to lock their doors and move to secure areas.

Radical shootings like this are scarce in Canada. Gun control laws were tightened following a 1989 shooting that left 14 women dead.

"I can say that we were on the verge of introducing legislation to ban assault-style weapons across this country. It was interrupted when the pandemic caused parliament to be suspended but we have every intention of moving forward on that measure and potentially other measures when the parliament returns."

Authorities are unsure what the motive behind this weekend's rampage was.

Police Chief Superintendent Chris Leather said, "That fact that this individual had a uniform and a police car at his disposal certainly speaks to it not being a random act."

Authorities believe the shooter may have targeted the first victims but then began attacking randomly, as many of the victims were not familiar with the shooter. For Newsy, I'm Gage Jackson.