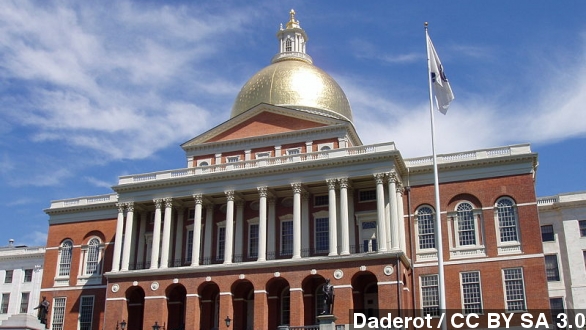 Workers pulled the capsule, buried by Samuel Adams and Paul Revere in 1795, from a stone at the Massachusetts State House.

The year is 1795. Samuel Adams and Paul Revere want to freeze some modern objects in time, so they place a small box in a cornerstone of the Massachusetts State House.

"There it is. The small box had been planted in the cornerstone of the state house 219 years ago. ... Officials are hopeful that all of the items inside are still in good condition," an NECN anchor said.

This isn't the first time the box has been unearthed. It was removed once before in 1855 when the building was being repaired. Then it was put back in the stone.

Massachusetts Secretary of State William Galvin told reporters they don't know exactly what the box contains, but it appears there are some papers, coins and an engraved plate. (Via WFXT)

He also noted that there is concern that some of the items may have been washed in acid before the box was reburied. Galvin told The Boston Globe, "Hopefully there will be no damage and we will be able to observe the artifacts that trace us back to the history not only just of this building, but of our Commonwealth and our country."

The capsule was taken to Boston's Museum of Fine Arts by a police escort, according to the Boston Globe. The museum will examine it through x-rays and likely open it sometime next week.

After its contents are examined, the box will be placed back in stone.  Galvin says officials don’t know at this time whether they will add anything to the capsule before placing it back in the stone.