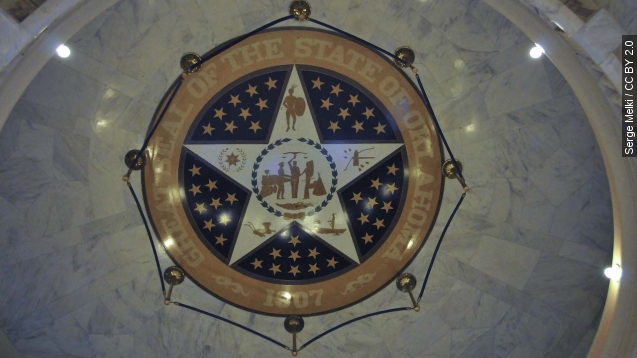 SMS
16-Year-Old Oklahoma Boy To Be Tried As Adult For Murder
By Lexie Hammesfahr
By Lexie Hammesfahr
October 12, 2015
A 16-year-old boy will be tried as an adult in Oklahoma. Michael Bever and his older brother are accused of murdering five family members in July.
SHOW TRANSCRIPT

An Oklahoma judge has determined the 16-year-old boy accused of murdering his parents and three siblings will be tried as an adult.

Michael Bever and his brother, 18-year-old Robert Bever, have been charged with first-degree murder and filed a not-guilty plea.

The two brothers are accused of killing their family members with "blade-type" weapons in July. They were found hiding behind the home when police arrived.

Michael Bever's lawyer suggested he has a mental health issue — which could have an impact on the trial. Oklahoma ranks No. 2 in the country for the highest rate of residents with mental illnesses. The odds of a person afflicted with a documented mental illness ending up in a state jail or prison are 4-1.

But because Michael Bever conspired with his brother, Tulsa County District Attorney Steve Kunzweiler said the state law is clear: "If anybody's going to commit a crime of murder in the first degree, you're going to be tried as an adult."

Oklahoma state law says anyone charged with first-degree murder between ages 15 and 17 should be tried as an adult.

The preliminary trial is Jan. 22. Michael Bever's lawyer plans to appeal the ruling to the Supreme Court if necessary. If convicted, Michael Bever faces life in prison without parole.

This video includes an image from Serge Melki / CC BY 2.0.