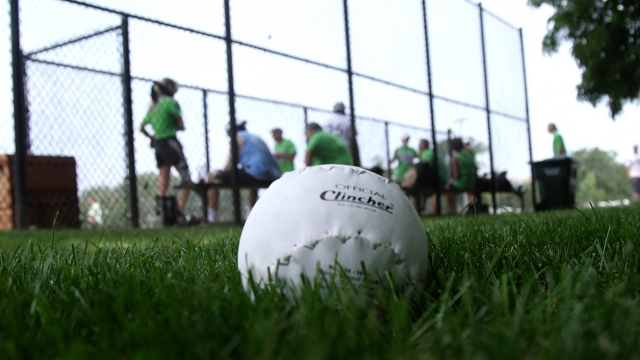 It’s been 10 years since a co-ed softball tournament was played in Chicago’s parks...at least this kind.

Softball was invented in Chicago 134 years ago and has been a beloved pastime for tens of thousands through generations. But there’s a particular type of Chicago softball that fell by the wayside in recent years, until this weekend: The 16-inch circumference, no mitt, finger-bruising clincher softball.

“Twelve inch I'm sure I'm going to upset a lot of people out there. We don't consider that softball. That's just a baseball blown up a little bit,” says Ron Kubicki, Chicagoan and President, 16-inch Softball Hall of Fame.

At the 16-inch Softball Hall of Fame museum, Kubicki walks us through its history. The ball started as a boxing glove.

“This is the boxing glove that was tied up—not the original one—but this is what [it's like] back in 1887 they tied it up with straps and used a broomstick. This was the 17-inch ball and it went down to a 16-inch ball,” says Kubicki.

“One of the more famous one is Michael Jordan playing 16” softball. He was tagged out, I guaranteed he argued the call too," says Kubicki.

A Park district spokesperson says the reason the tournament was discontinued was due to lack of interest, and others say it started to cost more to play in a league. But there’s been a resurgence.

“I love it! It seems like 16-inch softball is kind of falling behind. So this is great that they're bringing it out again,” says softball participant Beth Cernick.

Traditionally, the game is played without any gloves, but for this co-ed tournament, women are allowed to use them.

"It's pretty hard when you have a male hitting the ball at you for a woman. So it's nice to have a glove for that protection," says Cernick.

After more than year of the pandemic, residents say playing on the field is a welcome break.

“It just feels great to finally be around everyone and be around the energy,” says Gabriela Huante.

Edward Golden organized a team of family members. "I think it's a good way to stay socially distanced and have to have fun, see family, see friends,” he says.