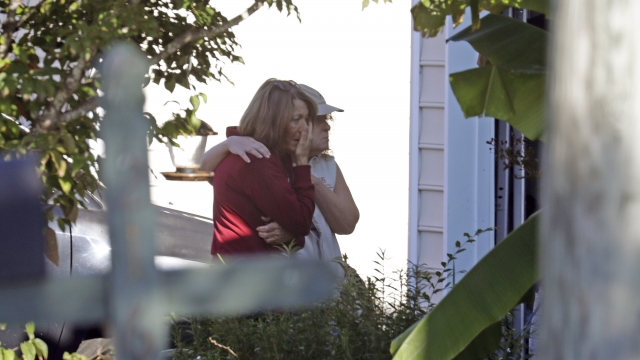 A suspect was taken into custody Thursday before 10 p.m. Police haven't announced a motive or their identity.

The incident started in the streets of a residential neighborhood where police say the shooter killed two people before fleeing to a walking trail in the area and killing three more.

"It's close to home," Joshua Phillips, who lives in the area, said. "You can't let your guard down, that's for sure."

The suspect was taken into custody before 10 p.m. after being cornered in a home. Police have not announced a motive for the suspected shooter or their identity.

Among the dead was a 29-year-old off-duty officer, Gabriel Torres. Torres is one of 11 officers shot just this week across the country.

In Bristol, Connecticut, two police officers were killed while responding to what police now believe was a fake 911 domestic violence call, meant to lure them into an ambush.

"It's the worst thing that could ever happen," Phillips said. "Two cops is dead. They're not coming home to their families. It's the worst."

CDC data shows a spike in gun violence since the pandemic, with gun-related homicides increasing across the country in metro and rural areas.

Another officer was killed in Las Vegas during a firefight.

"I don't want to surmise, I don't want to make judgments on that, but we are seeing an increase in violence associated against our officers on a daily basis," Clark County Sheriff Joe Lombardo said.

All of this comes on the heels of a record-breaking year of line of duty deaths by criminal acts in 2021.

Mass shootings have also been on the rise for the past two years and show no sign of slowing down.

"No neighborhood, no parent, no child, no one should feel this fear in their communities," Gov. Cooper said. "As policy makers, we cannot and we will not turn away from what happened here."

In a statement, President Joe Biden alluded to policy change saying, "Enough. We've grieved and prayed with too many families who have had to bear the terrible burden of these mass shootings... We must pass an assault weapons ban. The American people support this commonsense action to get weapons of war off our streets."

Police have not identified the exact gun the suspected shooter used, but it's been referred to as a "rifle" and a "long gun."

While 15-year-olds are typically charged as juveniles in North Carolina, a defendant can be tried as an adult if a judge transfers their case to Superior Court.