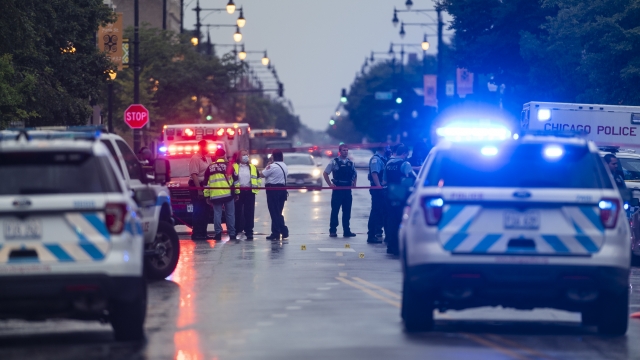 SMS
15 Injured In Shooting Outside Funeral Home In Chicago
By Meg Hilling
By Meg Hilling
July 22, 2020
Police say a passing car began firing into a crowd outside the funeral home, and some in the crowd fired back.
SHOW TRANSCRIPT

Fifteen people were injured in a shooting outside a funeral home in Chicago Tuesday night.

The incident occurred in the city's Auburn Gresham neighborhood and began when a passing car began firing into a crowd outside the funeral home. Police say some in the crowd fired back. The car ended up crashing down the street, with the occupants getting out and running different ways. Roughly 60 shell casings were reportedly found at the scene. Police tell news outlets a squad car had been stationed at the scene prior to the shooting because of the size of the gathering.

On Twitter, Chicago Mayor Lori Lightfoot condemned the violence, writing, "Far too many have suffered. Far too many have attended funerals and tried to start the process of healing entire communities following another senseless tragedy. When a person picks up a gun, we suffer as a city. This cannot be who we are."

The incident follows a violent weekend in Chicago in which 63 people were shot, 12 fatally.

Meanwhile, the Trump administration says it's planning to send federal agents to the city in response to the number of violent crimes being recorded. However, in light of the behavior of federal agents in Portland, Oregon, in recent weeks, Lightfoot says she will not allow "Donald Trump's troops to come to Chicago and terrorize our residents."

Additional reporting by Herbert G. McCann and Torrance Latham of the Associated Press.