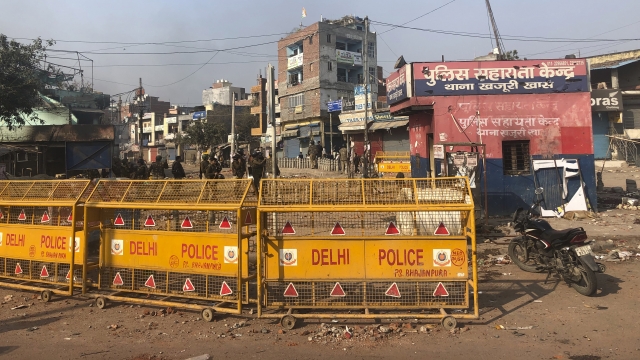 More than a dozen people in New Delhi have reportedly been killed in protests against India's Citizenship Amendment Act, or CAA. The killings come as President Trump concludes his first official visit to the country.

President Trump met with Indian Prime Minister Narendra Modi and members of Modi's political party, the BJP, during his two-day trip. The president said they discussed "religious liberty," but he evaded questions about the law and ongoing unrest during a press conference on Tuesday.

President Trump: "They have really worked hard on religious freedom. I asked that question in front of a very large group of people today. And he talked about — we talked about it for a long time, and I really believe that's what he wants. As far as the individual attack, I heard about it, but I didn't discuss that with him. That's up to India."

India's parliament passed the CAA in December, providing a path to citizenship for migrants from three Muslim-majority countries — so long as they are not Muslims. Critics argue the law is anti-Muslim and violates India's secular constitution. They also cite the government's annexation of Kashmir in August.

Demonstrations against the CAA have continued for more than two months and have been largely peaceful. But violence erupted on Sunday, when supporters of the law reportedly attacked protesters in Muslim-majority areas of northeastern Delhi.

Hospital officials say those killed include both Hindus and Muslims, as well as at least one police officer. Hundreds of others have been injured as police have tried to quell tensions.

The BJP denies that it is biased against India's 180 million Muslims, and its officials have urged all parties to avoid any escalating the situation. But critics have accused the BJP of instigating attacks against anti-CAA demonstrators, with one telling Al Jazeera English that they seemed premeditated.

That person said: "It also seemed that the local police were on their side — everyone had a weapon, some even carried a gun. They were the ones who threw the first stones."