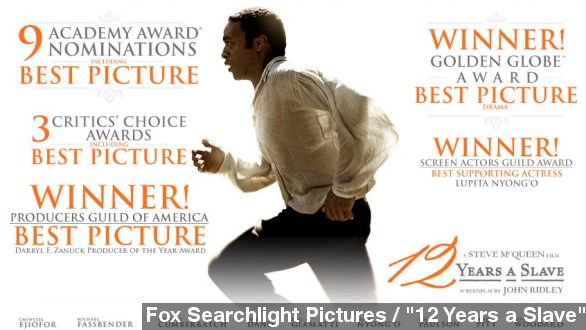 By Jamal Andress
March 2, 2014
"12 Years a Slave" Sweeps the annual Spirit Awards but how will the independent film fair Oscar Sunday?
SHOW TRANSCRIPT

Just when the analyzing of the Oscars had reached its tipping point, here comes the Spirit Awards.

If the Oscars is Senior Prom, then the Film Independent Spirit Awards is homecoming's tailgate. Every year the Spirit Awards is held in a heavy duty tent on a Santa Monica Beach. No tuxedos to to be found, and the award show is strictly for independent films. (Via  KABC)

As the Chicago Tribune notes, "the Spirit Awards held to its usual pattern of rewarding the nominees who figure most prominently in the Oscar race."

But what everyone really wants to know is if this award show will be a measuring stick for Oscar Sunday.

Well if 2013 is any indicator, the Spirit Awards means absolutely nothing to the Academy. While Silver Lining's Playbook dominated the 2013 Spirit Awards, Jennifer Lawrence was the only person who could also take home a golden statue the following night. (Via The Academy of Motion Pictures Arts and Sciences)

Also, "American Hustle" was notably missing as competition because it's not considered an independent film. Out of all nine categories where "12 Years a Slave" is nominated at the Academy Awards, "American Hustle" could serve as spoiler for eight of them.

Some of the other big winners at the Spirit Awards were Matthew McConaughey who took Best Actor for "Dallas Buyer's Club" and Cate Blanchett who won Best Actress for "Blue Jasmine." (Via KTTV)

Unlike the esteemed Academy of Motion Picture Arts and Sciences, if you want to vote for next year's Independent Spirit Awards, just pay 95 bucks to join the nonprofit organization Film Independent that puts on the awards every year.