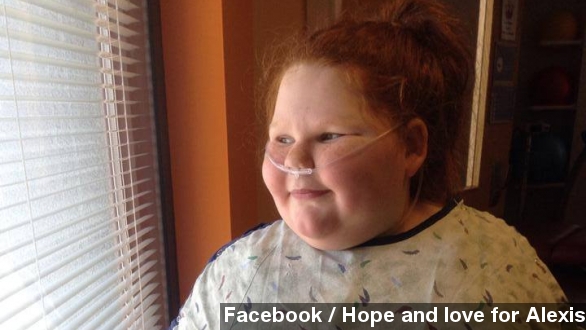 NBC reports Alexis Shapiro is now feeling full after eating, and she no longer depends on insulin or other medications to manage her type two diabetes.

It all started back in 2011 after brain surgery to remove a tumor damaged her hypothalamus, the part of the brain that regulates weight, appetite and moods. (Via The Huffington Post)

From there, Alexis began gaining weight at an alarming rate because of her insatiable hunger and inability to feel full.

"Alexis Shapiro went from 50 pounds to 200 in just two years and now has type 2 diabetes." (Via KPRC)

Friday, Alexis' mother Jenny Shapiro shared this post on the "Hope and love for Alexis" Facebook page, "Guess what???? We were able to be discharged from the hospital. we will continue to stay in Cincinnati for another week... I cannot thank the team and Cincinnati children's enough! They are all wonderful!" (Via Facebook / Hope and love for Alexis)

Alexis' doctor predicts she could lose about 40 pounds in the first few months after her surgery.