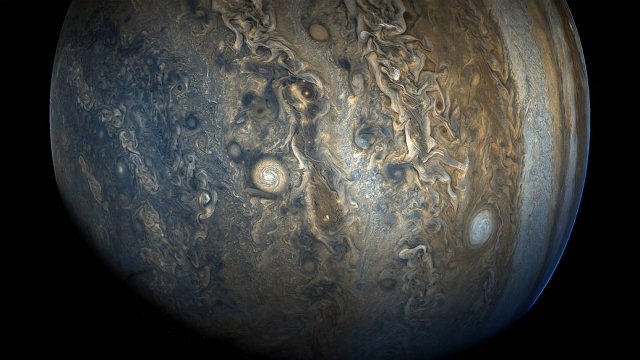 SMS
Astronomers Discover 12 New Moons Around Jupiter, Including 1 Oddball
By Ethan Weston
By Ethan Weston
July 18, 2018
The discovery brings Jupiter's total to 79 — the most moons of any planet in our solar system.
SHOW TRANSCRIPT

Galileo first discovered Jupiter's moons over 400 years ago. Back then, only four were known to science. But the recent discovery of 12 new moons brings Jupiter's count to a whopping 79 moons.

A team of astronomers announced their discovery Tuesday. They were originally looking at the edges of our solar system for a ninth planet and realized they could check out Jupiter at the same time.

Two of the moons the scientists discovered orbit close to Jupiter and orbit in the same direction as the planet spins. Nine are farther out, orbiting opposite Jupiter's spin, or retrograde. And one of the newly discovered moons is a bit odd.

This "oddball" likes to hang out with retrograde moons, but unlike them, it orbits in the same direction that Jupiter spins. It's only 1 km in diameter and could be the remnant of a larger moon that's been ground down over time.

The team's lead scientist told NPR he thinks there are still more tiny moons to be found near Jupiter. But, he admits, science might need a new classification for moons so small.