11 Restaurant Chains Get 'F' Grade On Antibiotics In Meat 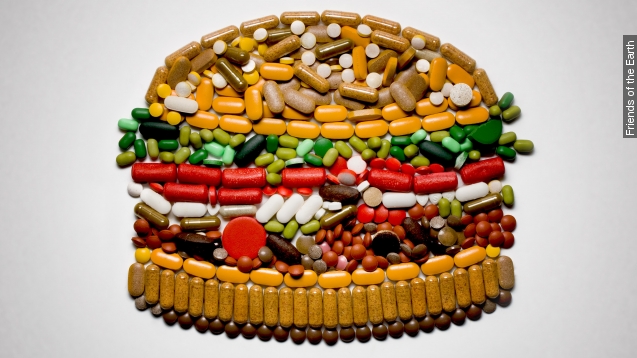 If you're craving a burger, you might want to rethink which fast-food restaurant you go to.

Environmental organization Friends of the Earth published a new report Tuesday grading the country's top restaurant chains on how they use antibiotics in their meat and poultry supply chains.

Out of 25 restaurants surveyed, only five scored passing grades. Of those five, only two received A's: Chipotle and Panera Bread.

Overusing antibiotics in our food supply chains can create antibiotic-resistant bacteria that can transfer to humans when we eat meat and poultry, according to Friends of the Earth. (Video via National Resources Defense Council)

The organization says it's also bad for the environment. How? It involves the almost 2 trillion pounds of animal waste produced annually in the U.S., according to The Food Animal Concerns Trust.

Up to 75 percent of an antibiotic can pass through an animal, so when that waste gets deposited, so do the antibiotics and the now-resistant bacteria. That bacteria then risks being transfered to humans through surface and ground waters as well as through manure used to farm vegetables and fruits. (Video via Natural Resources Defense Council)

Plus, about 80 percent of all antibiotics used in the States are for livestock, so the chances of resistant bacteria transferring to humans is high. (Video via Natural Resources Defense Council)

Some restaurants are promising to change how some antibiotics are used.

McDonald's is reducing the routine use of antibiotics in chicken, and its main chicken-supplier, Tyson, said it would stop administering human antibiotics to chicken. (Video via McDonald's)

Relying less on antibiotics in livestock could also help reduce the number of infections in humans. The CDC reports around 2 million Americans get antibiotic-resistant infections a year, and 23,000 of those people die.