11 Have Died On Mount Everest Amid 'Traffic Jams' Of Climbers 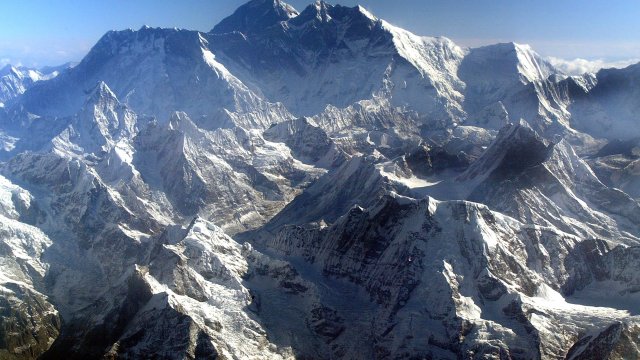 SMS
11 Have Died On Mount Everest Amid 'Traffic Jams' Of Climbers
By Peter Hecht
By Peter Hecht
May 27, 2019
Mount Everest is seeing an unprecedented number of climbers, and delays on dangerous slopes are being blamed for a spike in deaths.
SHOW TRANSCRIPT

The brave — or maybe foolhardy — souls who climb the world's tallest peak say there is no experience on the planet equal to reaching the summit of Mount Everest.

The prize is a triumph of human endurance, capped by a transcendent view of the jagged, snow-capped Himalayas.

But now, amid a spring thaw, Mount Everest is overcrowded with climbers. And people are dying in high-altitude human gridlock.

Eleven hikers have died in recent weeks while attempting to scale the 29,029-foot peak. Five people died in 2018.

The spike in deaths is being blamed in part on delays as large numbers of climbers attempt the final Everest ascent in an area known as "the death zone."

As many as 250-300 hikers and guides in single-file have been clogging the route in recent days. That's leading to climbing delays of three hours on a dangerous cliff and more traffic on the way down.

A mountain guide told the New York Times, "I have climbed Everest so many times, but this spring's traffic jam was the worst.

"Many climbers who moved to the summit without extra supplement oxygen bottles suffered the most. They suffered because of the traffic jam, not because of wind and coldness."

Last week, 55-year-old Donald Cash of Utah reached the summit and a lifetime goal of scaling the tallest mountains on all seven continents. He celebrated. Later, he fainted from altitude sickness at more than 28,000 feet. His guides couldn't revive him. According to the Times, his family believes he had a heart attack.

The ministry of tourism in Nepal says it has issued a record 381 permits for Mount Everest climbers this year. It granted 346 in all of 2018. Hundreds more permits have been issued for expeditions from the Tibetan side of the mountain, where two of the deaths occurred.

Cash's final resting place is on Mount Everest. He reportedly signed a waiver to leave his body there after telling family members he would rather die on the famous mountain than in a hospital bed.