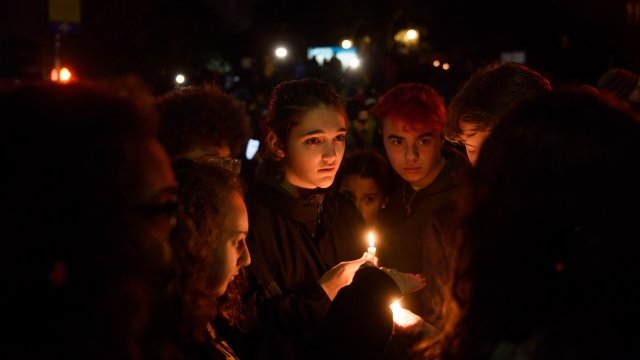 Authorities say the suspect, 46-year-old Robert Bowers, shouted an anti-Semitic slogan before opening fire at the Tree of Life Synagogue in the Squirrel Hill neighborhood of eastern Pittsburgh. After an exchange of fire with police in which several officers were shot, the suspect surrendered.

Bowers, who underwent surgery for wounds suffered after the exchange of fire, now faces some 29 charges, including multiple accounts of two hate crimes. He is scheduled to appear in court Monday.

The Anti-Defamation League says Saturday's shooting is the worst single attack against the Jewish community in U.S. history. The ADL reports last year saw the biggest single-year jump in anti-Semitic incidents since it began tracking them in 1979.

Thousands of people held vigils in PIttsburgh and across the U.S. Saturday night to mourn the victims of the attack, and the president announced flags at federal buildings will be flown at half-staff through Wednesday.

Players and fans also observed moments of silence before the Pittsburgh Penguins game against the Vancouver Canucks and in Los Angeles before Game 4 of the World Series.