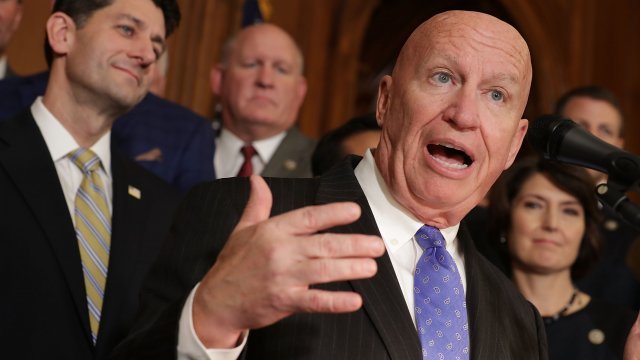 SMS
107 GOP Lawmakers Sign Letter Urging Trump Not To Impose Tariff Plan
By Gabrielle Ware
By Gabrielle Ware
March 7, 2018
They say they're concerned broad tariffs could have "unintended negative consequences to the U.S. economy and its workers."
SHOW TRANSCRIPT

One hundred and seven Republican lawmakers wrote a letter to President Donald Trump dated Wednesday, urging him not to go through with his plan to impose broad tariffs on steel and aluminum imports.

The letter by the House Ways and Means Committee said in part, "We urge you to reconsider the idea of broad tariffs to avoid unintended negative consequences to the U.S. economy and its workers."

They even offered a compromise, saying if Trump is dead set on implementing tariffs he should at least avoid broad ones.

Top White House economic adviser Gary Cohn announced he was resigning Tuesday amid a disagreement with Trump about the tariffs.

Trump announced last week he'd introduce a 25 percent tariff for steel and a 10 percent tariff for aluminum. Despite strong opposition from both sides of the aisle, Treasury Secretary Steven Mnuchin said the White House is "definitely" moving forward with the tariffs.