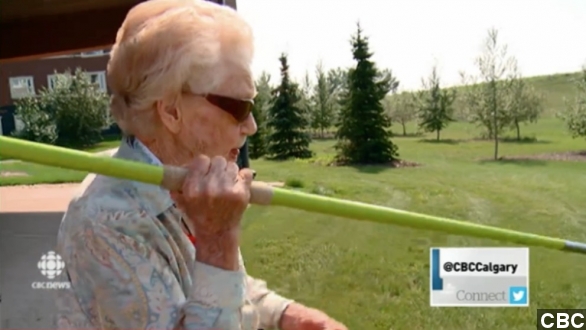 ​A 101-year-old Canadian woman is making history this week as she competes in the javelin throw at a nationwide sporting event.

REPORTER VIA CBC: "The javelin happened by accident when she was working registration at the Alberta Seniors Games 15 years ago."

FLORENCE STORCH: "There was no one for javelin, so I put my name down."

She ended up medaling the very first time she competed in the event and hasn’t stopped since.

Later that year, she once again competed in the same games in a different city and kept things consistent, throwing 4.26 meters. Storch was the one competitor in her age division, so she received a gold medal.

And the Calgary Sun says Storch, who is the oldest Canadian javelin thrower ever, is even a record holder for her age group in women's javelin. Out of all the female competitors 90 years and older, Storch has thrown the farthest at 5.61 meters.

But at 101 years of age, Storch isn't the nimblest she's ever been. And her son, Ed Storch, who also competes at the games, told CBC he's worried about her.

"I'm encouraging her to hold one hand on the walker while she throws the javelin because if she falls down and breaks a bone. You know, 101, that's a serious thing. It's life threatening."

It seems like Storch is doing the right thing for her body by getting active, though.

The Office of Sport in New South Wales says engaging in physical activity when you're older combats some of the most common symptoms of aging, such as the loss of flexibility, balance and muscle strength and limited mobility.

The National Institutes of Health says being inactive in your older years can have negative health effects. Research has shown people who don't regularly perform some physical activity take more medications and frequent the hospital more often than those who exercise.

Storch will compete Thursday morning in the Canada 55+ Games at Strathcona County. But don’t think this is the end of the road for her. Storch told CBC she’s not "quitting anytime soon."