10-Year-Old's Condition Is So Rare, It's Nameless 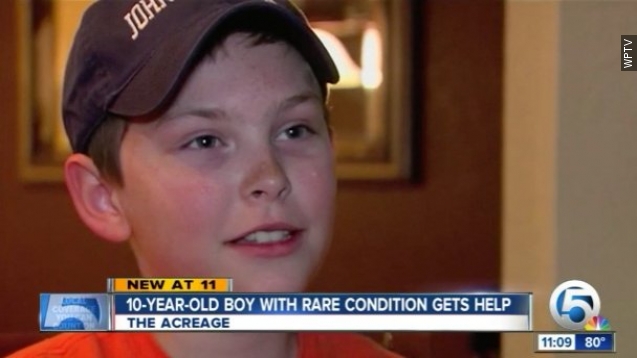 After struggling for six years, a boy is finally recovering from a vascular condition so rare, it's not even named.

A 10-year-old Florida boy is beginning his path to recovery from a vascular condition so rare, the diagnosis doesn't even have a name.

"I just usually had pain," John Kemp told WPTV. "We used to always turn back before we got to where we were going because I couldn't make it."

John Kemp first experienced severe pain in his legs and back about six years ago. He told Newsy's partners at WPTV, the pain became so bad he needed a wheelchair, yet doctors couldn't determine the cause.

The last straw was Christmas 2013, when John was in too much pain to open his presents.

"So we'd have to take breaks like every 15 minutes," John's father told WPTV.

John's parents sent images of a vascular malformation near his spine to doctors across the country hoping someone could solve the mystery.

Then, about a year ago, a doctor at Johns Hopkins did just that.

He figured out there was an extra blood vessel between John's kidney and spine. The extra blood flow put pressure on his back, which doctors alleviated by clogging the vessel.

"I was just happy and thinking, finally I know what's going on," John told WPTV.

John still has many medical issues, but with the diagnosis in place, he now has a path to recovery. His parents are sharing the diagnosis with the hope that others affected by the condition my finally get help.