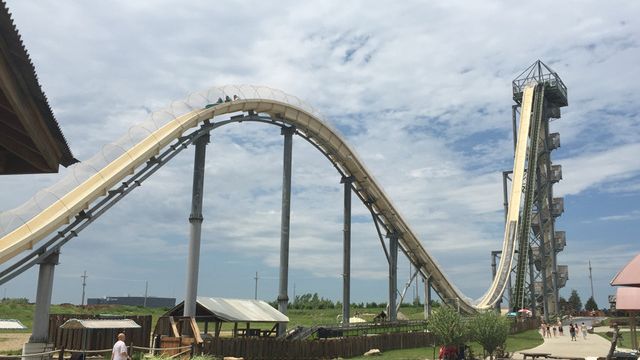 Kansas City police are investigating the accidental death of a 10-year-old boy at a local water park.

Officials originally said a 12-year-old boy had been killed at Schlitterbahn water park. The boy has since been identified as 10-year-old Caleb Schwab, son of Kansas Rep. Scott Schwab.

In a statement on his death, the family wrote, "Since the day he was born, he brought abundant joy to our family and all those he came in contact with."

Officials at the park say the boy died on the Verrückt water slide Sunday afternoon. The slide, which is billed as the world's tallest water slide, includes a drop of over 168 feet; passengers on the ride's rafts can reach speeds of up to 70 miles per hour.

"They say they saw the boy come down that first steep drop and then became airborne, hitting the netting. Witnesses fear that that collision is what killed the boy," said KSHB reporter Brian Abel.

A Kansas City police chief on Twitter deemed the death accidental, but neither the police nor the park staff offered any more details.

Park spokesperson Winter Prosapio told reporters, "We honestly don't know what's happened. That's why a full investigation is necessary. We have to understand what happened."

The park says its rides are inspected daily and receive independent inspections at the beginning of each season. Several of the park's patrons told Newsy's partners at KSHB that early in the day, the harnesses on the Verrückt slide weren't functioning properly.

The park was closed early following the boy's death. Park officials say the entire park will be shut down Monday and the Verrückt slide will be closed until an investigation is conducted.