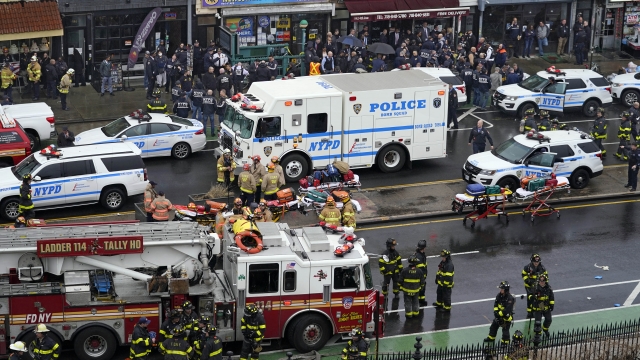 Officials said the gunfire wounded at least 10 people, and at least 16 in all were injured in some way in the attack that began on a subway train that pulled into the 36th Street station in the borough's Sunset Park neighborhood. Five people were in critical condition, New York Fire Department Acting Commissioner Laura Kavanagh said, but Police Commissioner Keechant Sewell said there were no life-threatening injuries.

Sewell added that the attack was not being investigated as terrorism, but that she was “not ruling out anything.” The shooter has not been identified.

According to multiple law enforcement sources briefed on the investigation, preliminary information indicated a suspect fled wearing a construction vest and a gas mask.

Photos and video from the scene showed people tending to bloodied passengers lying on the floor of the station and the air filled with smoke. Fire and police officials were investigating reports that there had been an explosion, but Sewell said at a press conference just after noon that there were no known explosive devices. Multiple smoke devices were found on the scene, said mayoral spokesperson Fabien Levy.

Investigators believe the gunman deployed a smoke device before opening fire, one of the law enforcement officials said. Investigators are examining whether he may have used that device in an effort to distract people before shooting, the official said.

Watch as NYPD Executives and City and State Officials provide an update on the shooting incident in Brooklyn. https://t.co/xGGlDJ6UQI

A bystander video shows people lying on the subway platform amid what appeared to be small puddles of blood, as a loudspeaker announcement told everyone on the smoke-hazy platform to get on a train. Inside a subway car, a person lay on the floor, encircled by others. Outside the station, a police officer yelled, "Let’s go! Get out of the way!"

New York City Mayor Eric Adams’ office did not immediately have more details. Adams was at the mayor’s residence Tuesday morning and was being briefed, according to a spokesperson.

The incident happened on a subway line that runs through south Brooklyn in a neighborhood about a 15-minute train ride to Manhattan. Local schools, including Sunset Park High School across the street, were locked down.

Gov. Kathy Hochul said in a statement she had been briefed on the situation and said her office would work with the transit authority and police department as the investigation continued. President Joe Biden had also been briefed on the latest developments and White House senior staff were in touch with Adams and NYPD Commissioner Sewell.

The shootings come as New York City has faced a spate of shootings and high-profile incidents in recent months, including on the city’s subways.

Adams, a Democrat a little over 100 days into his term, has made cracking down on crime — especially on the subways — a focus of his early administration, pledging to send more police officers into stations and platforms for regular patrols. It wasn’t immediately clear whether officers had already been inside the station when the shootings occurred.