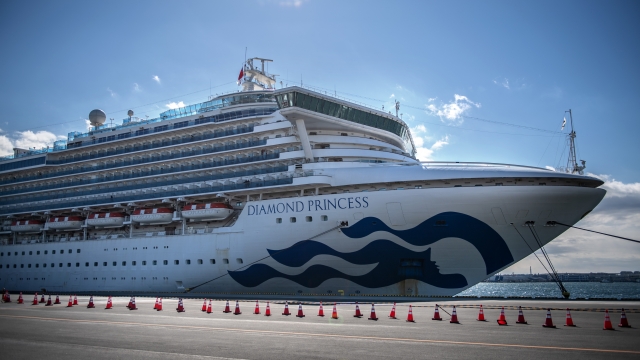 The number of passengers on board a cruise ship with coronavirus is growing. At least 61 people have been diagnosed with the virus, according to Japan's Health ministry Friday. The new cases came out of the 171 test results under review.

Thousands of passengers and crew members are currently under a 14-day quarantine on board the Diamond Princess cruise ship. It's been anchored near the Japanese port of Yokohama since Monday, after a man who'd previously traveled on the ship in January tested positive for the virus.

Those who have tested positive have been escorted off the ship and taken to local hospitals. The rest who are still on the ship are allowed to go outside in groups while wearing masks, but other than that, they have to stay inside their cabins. They have internet and phone access to keep in touch with family members.

Similar health checks were performed on the World Dream ship, which was docked in Hong Kong as of Thursday afternoon. There are more than 1,800 people aboard that ship and dozens of crew members have reported feeling ill.

Symptoms of the coronavirus range from runny nose and sore throat to fever and respiratory problems. The World Health Organization says there's currently "no known" drug treatment for the virus, which has already killed hundreds of people.

Many airlines across the globe have either suspended or canceled flights to China over the virus, which the WHO has declared a public health emergency of international concern. Some cruise lines — including Royal Caribbean, the biggest cruise operator in the world — are also choosing not to travel to China during this time.