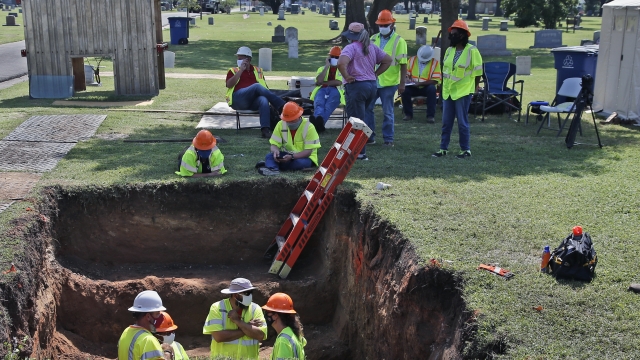 Back in 1921, White Tulsa residents attacked what was known as "The Black Wall Street" and killed as many as 300 people, by some estimates.

At least 10 more bodies were found on Wednesday in an unmarked mass grave at a Tulsa cemetery where investigators are searching for victims of the 1921 Tulsa Race Massacre.

The day before, archaeologists found one body and possibly a second in an area known as the "Original 18," where funeral home records and some headstones indicate massacre victims were buried. None of the bodies have been removed, and Oklahoma’s state archaeologist said it's still too early to definitely say that the remains are are victims of the massacre.

The archaeologist said what they've found constitutes a mass grave. She said: "What we were finding was an indication that we were inside a large area, ... a large hole that had been excavated and into which several individuals had been placed and buried in that location."

Back in 1921, White Tulsa residents attacked what was known as "The Black Wall Street" for its successful Black-owned businesses. It's estimated as many as 300 people died, although only three dozen deaths were officially reported.

Additional reporting by Ken Miller of The Associated Press.