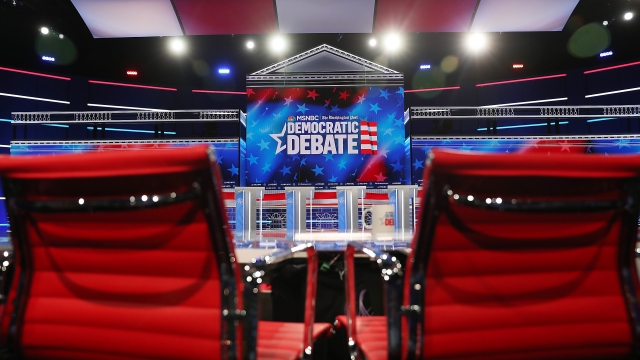 The Democratic presidential debate in Atlanta again put 10 candidates on stage. But the issues the candidates discussed was more wide-ranging than previous debates.

Wednesday's debate kicked off less than two hours after an impeachment hearing wrapped on Capitol Hill. And that inquiry was the first topic up for discussion.

"Well, the Constitutional process of impeachment should be beyond politics. And it is not a part of the campaign. But the president’s conduct is," Buttigieg said.

"But let me make very clear that what this impeachment proceeding is about is really our democracy at stake," Klobuchar said.

"Ambassador Sondland, by his own words, told us that 'everyone was in the loop.' That means it is a criminal enterprise engaged in by the president, from what we heard today, the vice president, the secretary of state and the chief of staff," Harris said.

The moderators kept the debate on track and moving quickly. One issue that came up in relation to a few different policy questions was race.

Harris said "For too long, I think candidates have taken for granted the constituencies that have been the backbone of the democratic party. They show up when it's, you know, close to election time and show up in a black church and want to get the vote, but just haven't been there. ... But the question has to be, 'Where ya been and what are you gonna do?'"

Another issue that came up multiple times was voting rights, which was a major focal point of the Georgia gubernatorial race between Stacey Abrams and Brian Kemp.

"This is a voter suppression issue. Right here, in this great state of Georgia it was the voter suppression, particularly of African-American communities, that prevented us from having a Gov. Stacey Abrams right now," Booker said.

Buttigieg has been rising in recent polls, and that made him a target.

"But just like I have won statewide — and Mayor, I have all appreciation for the good work as a local official — and you did not when you tried, I also have actually done this work. I think experience should matter," Klobuchar said.

Perhaps the biggest scuffle of the night happened as the evening was winding down and Rep. Tulsi Gabbard took another swipe at Buttigieg's experience.

"I think the most recent example of your inexperience in national security and foreign policy came from your recent careless statement about how you as president would be willing to send our troops to Mexico to fight the cartels," Gabbard said

"I know that it's par for the course in Washington to take remarks out of context, but that is outlandish even by the standards of today's politics," Buttigieg said.

"Are you saying you that didn't say that?" Gabbard said.

"I was talking about U.S.-Mexico cooperation. We've been doing security cooperation with Mexico for years." Buttigieg continued, "If your question is about experience, let's also talk about judgment. One of the foreign leaders you mentioned meeting was Bashar al-Assad. I have in my experience such as it is, whether you think it counts or not since it wasn't accumulated in Washington, enough judgment that I would not have sat down with a murderous dictator like that."

The next debate will be Dec. 19 in Los Angeles. Six candidates have already qualified.