Gillibrand Drops Out As Stage Is Set For 3rd Democratic Debate 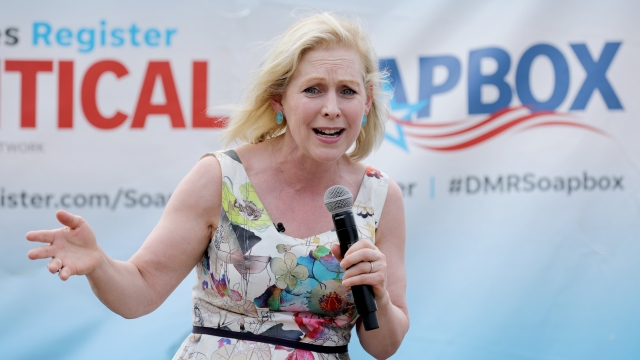 SMS
Gillibrand Drops Out As Stage Is Set For 3rd Democratic Debate
By Adam Elrashidi
By Adam Elrashidi
August 28, 2019
Just 10 candidates met the polling and campaign contribution requirements to participate in the Sept. 12 debate.
SHOW TRANSCRIPT

New York Sen. Kirsten Gillibrand has dropped out of the 2020 presidential race. Her announcement came Wednesday after she failed to qualify for the third Democratic primary debate, scheduled for Sept. 12.

Gillibrand said she would endorse another candidate but hadn't picked a favorite yet, noting that she would support the eventual nominee and "do whatever it takes to beat" President Trump.

The junior senator's campaign focused on family and women's issues, but it seemed to get lost among her more established and progressive rivals. She also failed to gain traction in national surveys and, according to The New York Times, had nearly depleted her campaign funds.

A pair of polls released on Wednesday showed former Vice President Joe Biden with a significant lead, defying the results of a  Monmouth University Poll published Monday that showed him in a virtual tie with Sens. Elizabeth Warren and Bernie Sanders. Wednesday's poll results also seem to contradict reports that enthusiasm for Biden's campaign is beginning to wane.

Still, Biden, Warren and Sanders' numbers will allow them to take the stage in Houston, Texas, next month alongside seven other candidates, including Sen. Kamala Harris, who's sitting at 7%, and entrepreneur Andrew Yang at 3%.

Meanwhile, a number of other hopefuls, including billionaire Tom Steyer, Hawaii Rep. Tulsi Gabbard and New York City Mayor Bill de Blasio, failed to qualify for the debate because they didn't receive at least 2% in a minimum of 4 qualifying polls.