Rural Ambulances on the Brink of Collapse as Funds Plummet 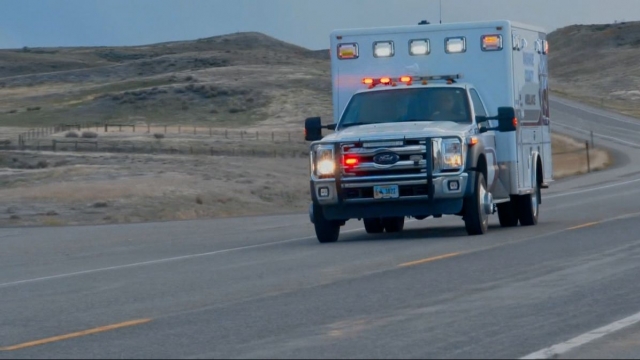 Ambulance crews are becoming extremely limited in rural areas. In some places, the results could be nobody responding to a 911 call. More than a third of all rural EMS are in danger of closing after the pandemic further stretched resources and funding.

With its rugged terrain and wide open spaces, Wyoming is still the wild frontier. That’s the draw of places like Washakie County. The trade-off? The nearest major trauma hospital is more than two and a half hours away.

For rural residents, access to emergency medical services, paramedics and an ambulances can mean that everything becomes a life or death issue.

Luke Sypherd spent the past three years running Washakie County’s volunteer ambulance service, a literal lifeline for some 8,000 residents. But as of this month, the volunteer service is no more.

Sypherd: "We just saw that we didn't have the personnel to continue."

A nearby hospital system, Cody Regional Health, has agreed to provide ambulance coverage averting a crisis in this county. But it’s a problem playing out across rural America: ambulance crews are running out of money and volunteers.

Phillip Franklin, EMS Director of Cody Regional Health says, "The majority of the ambulance services are not paid so if you don't have your volunteers, they can't run calls. There’s simply just not enough volumes to keep ambulance service afloat and in the state of Wyoming EMS is considered non-essential. So that means there's nobody responsible to fund these entities."

Sypherd: "This isn’t something that’s in the future it’s happening now."

According to Sypherd, the funding model for EMS is fundamentally flawed.

"You’re reimbursed based on the number of patients that you transport to a hospital so you could get called 1,000 times a year and only transport 750 patients. Those other 250 calls you made no money on," he said.

Phillip Franklin, the EMS director for Cody Regional Health, said, "When you look at what's happening here is just the tip of the iceberg. There's other services throughout the state that are just one bad year away from closure."

Wyoming may have the smallest population in America, but when it comes to land, the Cowboy state is the ninth largest.

Fremont County is roughly the size of the state of Vermont but the private company providing ambulance services here says it can’t afford to keep going after losing $1.5 million in revenue last year. The company, American Medical Response, announced it won’t renew its contract when it runs out on June 30. No others have bid.

Fremont County Commissioner Larry Allen: "Because of the distance and the ruralness of this county, we just don't have people standing in line wanting to provide ambulance service."

Larry Allen: "I worry about not providing … a quick response."

Jordan Dresser, chairman of the Northern Arapaho Business Council, said, "I think if we didn't have access to ambulances, death rates would be higher."

"A lot of our tribal members don't have working vehicles or they don't have direct access to take themselves to the hospital or the clinics. So its a matter of life and death essentially for us," said Dresser.

In parts of rural America, the system that was built to save lives is now itself in need of saving.