75 Years Ago: An Executive Order Sent 120,000 Japanese Into Internment 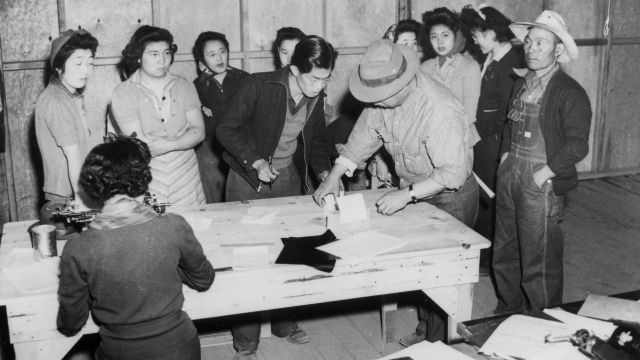 Seventy-five years ago, President Franklin D. Roosevelt committed one of the U.S. government's greatest violations of personal freedom: the internment of Japanese-Americans during World War II.

Two months after the attack on Pearl Harbor, on Feb. 19, 1942, Roosevelt signed Executive Order 9066. That authorized the relocation of Japanese-Americans.

The fear was that Japanese-Americans would side with Japan if provoked by a full-out invasion.

While German-Americans and Italian-Americans were also affected, they didn't face the same level of persecution.

Over 120,000 people — the majority Japanese-Americans — were relocated to one of 10 mainland camps.

Once at a camp, people had no way of knowing how long they would be required so stay.

The last camp wasn't shut down until March 1946.

For nearly 50 years, the U.S. government struggled to recognize those who suffered.

During the war, the U.S. Supreme Court upheld the president's order in two separate cases.

But in 1988, President Ronald Reagan signed the Civil Liberties Act. That deemed the internment "a grave injustice" and awarded restitution payments to eligible survivors.

Both former presidents George W. Bush and Bill Clinton added their sympathies by sending apology letters to descendants of survivors of the camps.