What's In The COVID Relief Bill? 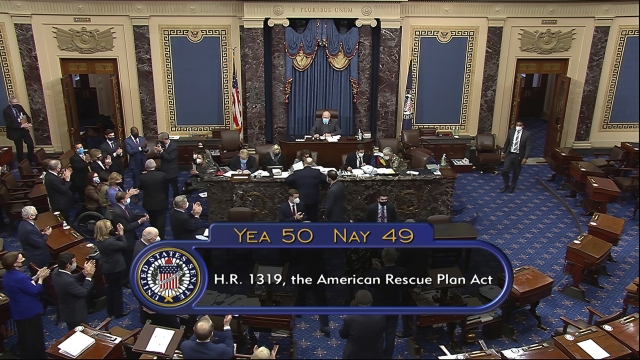 Tax credits for families with children will increase, but the $15 minimum wage provision Democrats pushed for didn't make the cut.

“Help is on the way,” Senate Majority Leader Chuck Schumer declared from the Senate floor on Saturday, moments after the Senate passed the American Rescue Plan, a comprehensive COVID relief package championed by President Joe Biden.

When the bill passes the House and is signed by President Biden, the average American making $75,000 or less will receive a stimulus check for $1,400. Individuals earning up to $80,000 a year or couples earning $160,000 per year will receive reduced payments.

Unemployed Americans will receive an additional $300 a week from the federal government on top of their state unemployment check, a credit which was set to expire this week but now will last until early September.

Additionally, cities and states will be given money to distribute housing assistance, including $30 billion to help families afford rent and utilities, and $10 billion in mortgage payment assistance for homeowners.

For companies, there will be additional Paycheck Protection Program funding and $25 billion going to the restaurant industry, aiming to cover payroll, rent and utilities for restaurants still struggling to get by.

Not in the deal, however: a $15 per hour minimum wage, though Democrats vow to keep pushing.

“We didn’t get the votes for that,” Schumer told reporters over the weekend, “but we’re going to keep fighting for it.”

The American Rescue Plan is expected to pass the House as soon as Tuesday and head to the president’s desk for a signature before the end of this week.

Eligible Americans could receive $1,400 direct deposits as soon as later this weekend or early next week.