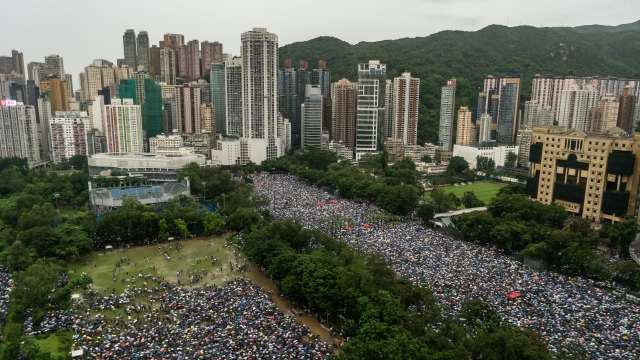 Organizers say as many as 1.7 million people turned out for a pro-democracy protest in Hong Kong on Sunday. That's roughly a quarter of the city's population.

Police had given permission for the protest to be held in Hong Kong's Victoria Park. But the large crowd — which contained a mix of families, seniors and young people — spilled out into the streets. Defying the police order, they marched toward government headquarters.

Hong Kong's government noted that the protest remained peaceful. But it still condemned demonstrators for "seriously affecting traffic and causing much inconvenience to the community."

"It's just proof that when riot police do not storm into the crowd, protest could remain in principle peaceful without any clash. In fact, it's the first week in the past eight weeks without any tear gas fired on Saturday and Sunday," Wong said.

Demonstrators started protesting more than two months ago over a now-suspended extradition bill, which would have allowed China to extradite suspects from Hong Kong.

Critics still want the bill to be fully withdrawn. And protests are now also calling for democratic reforms and for an independent investigation into allegations that police have used excessive force on demonstrators.

The Hong Kong government reiterated Sunday that officials will begin working with protesters after the demonstrations have stopped.