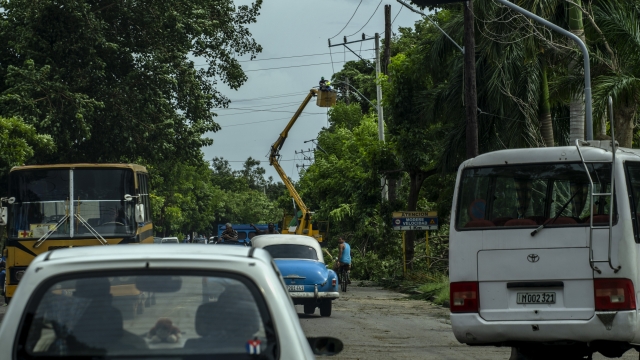 It could be days or weeks before power services are completely restored in Florida as Hurricane Ian makes landfall.

A transformer blew in Bradenton, Florida, prompting a power outage in the community near Sarasota. Across Florida, more than 1.5 million were without power before the end of the day Wednesday.

The outages are one of the most disruptive parts of vicious storms like Hurricane Ian, which is leaving a path of darkness from Cuba to Florida.

"They're positioned at 24 different locations throughout the state."

Workers from Kentucky left in the dead of night ahead of the storm, knowing Florida would need all hands on deck.

"You've got to identify the real trouble spots and the real priorities that you need to restore power first, so those crews will be dispatched according to that," said Daniel Lowry, Kentucky Utilities spokesperson.

On Twitter, Duke Energy posted a photo of its fleet standing by before landfall Wednesday, saying they've dispatched almost 10,000 workers to get power back on whenever and wherever they can as conditions improve.

At the command center for Florida Power & Light, workers monitor a smart grid around the clock for outages across its 12 million customers — part of a new world for Florida power.

"After Hurricane Irma in 2017 where we saw a lot of destruction to our overhead system from windblown debris and tress contacting lines and falling into lines, that's when we really started focusing on putting the existing overhead lines underground," said Robert Gaddis, director of Florida Power & Light Underground Program.

Now the utility says 45% of lines in its system are buried. Coupled with the smart grid, power restoration these days is much easier.

"Prior to having this technology out, we would have to drive out and take a look and physically put eyes on the entirety of our power lines to figure out where the fault was," said Justin Klocman, manager of Florida Power & Light distribution control center.

Still, it's not an easy feat.

A FEMA administrator warned a number of Floridians with no hurricane experience to take the storm very seriously and to ask neighbors for help.

Duke Energy laid out its restoration process: The first step is to locate and de-energize any downed power lines. Then, it's all about getting as much power back to as many people as soon as possible. That means starting with the biggest power-carriers, addressing large transmission lines first.

The last step of their process is to repair transformers and individual service lines. That means while the work starts as soon as it's safe, it could be days before the lights are back on for many in the dark.

"We will make sure that all available resources are used to help you through this difficult time," said Kevin Guthrie, director of Florida Department of Emergency Management. "Please do everything you can right now to stay safe."