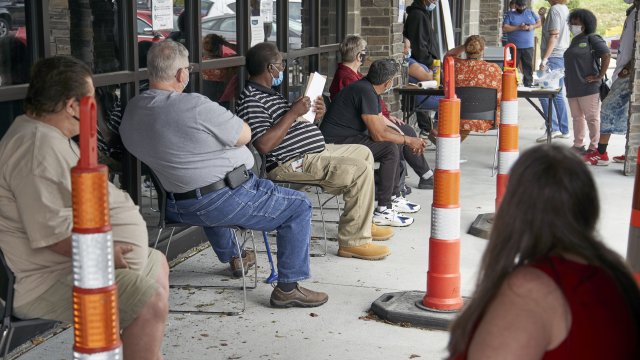 Workers filing unemployment will no longer receive an additional $600 in benefits after July 31 unless Congress moves to extend it.

Another 1.3 million Americans filed jobless claims last week — nearly the same as the prior week, but higher than expected.It was also the seventeenth week in a row in which claims were more than one million, putting the total number at over 51 million since March.The recent surge in new COVID-19 cases isn’t helping. Earlier this week, California Governor Gavin Newsom reversed his state’s reopening. "The sectors that we're closing state wide, again restaurants, wineries, movie theaters, family entertainment, zoos, museums, cards rooms and bars, to outdoor activities, to the extent possible,” Newsom said. And relief measures in the first round of federal stimulus will expire at the end of this month. That includes the additional $600 a week in unemployment benefits, which some economists say is responsible for a recent rebound in consumer spending. Meanwhile, Congress remains at a standstill on another stimulus. House Speaker Nancy Pelosi said a bill will be coming soon. "We have to have a bill. We will have a bill and I hope we will have it sooner rather than later because people really need to have it,” Pelosi said. Lawmakers in Washington have about two weeks to get to work and come to agreement before the stimulus expires.