'Godzilla' Roars Into Theaters. Is It Worth It? 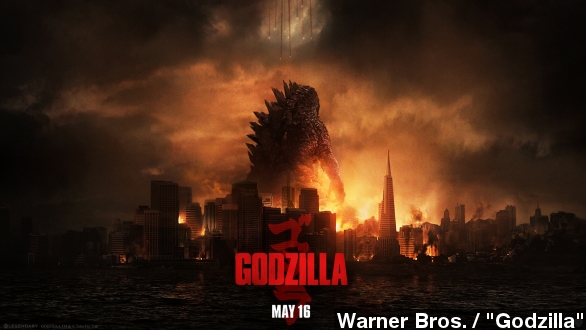 SMS
'Godzilla' Roars Into Theaters. Is It Worth It?

Godzilla is almost here — the movie, not the monster so don't panic. So, is this year's rendition of it worth seeing? Well, it depends on who you ask.

The reviews are all across the board for Warner Bros. 2014 action-packed thriller "Godzilla" which features the biggest version of the legendary movie monster we've seen yet, standing 350 feet tall. (Via Warner Bros. / "Godzilla")

The plot for the Gareth Edwards-directed movie is pretty much the same as previous Godzilla movies — the monster is awoken, starts destroying humankind and man must stop it before it wipes everyone out.

​And, hey, even one of the Olsen sisters. That's Elizabeth, the younger sister of the twins. (Via AMC Theatres)

Though the reviews are a bit scattered, the majority agree Godzilla is better than its recent counterparts. (Via A.V. Club, CinemaBlend, The Verge)

A writer for Cinema Blend says, "Godzilla is everything you want out of a summer movie. It's got a world and story so big that it demands to be seen on the biggest screen. ... All in all, Godzilla is the best disaster movie since Independence Day."

But, the film also has its haters which say it's a lot of destruction and not much else.

At least that seems to be the biggest beef those critics have with the film. The Sydney Morning Herald calls the human characters "dull" and The Guardian says it gets "tiresome."

The StarTribune writes, "Will you have fun watching this movie on opening weekend with friends? No doubt. Will you remember it in a year? Dubious. Irony of ironies, this 'Godzilla' leaves a shallow footprint."

So, maybe a Forbes contributor summarizes it best with the headline:

"'Godzilla' Lives Up To B-Movie Legacy, But Just Barely" (Via Forbes)