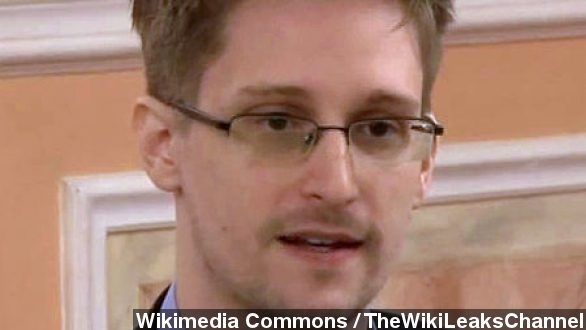 By Jay Strubberg
May 14, 2014
Sony Pictures and the James Bond franchise's producers plan to make a film adaptation of Glenn Greenwald's new book about the NSA leaks.
SHOW TRANSCRIPT

Edward Snowden's leak of top secret U.S. documents and government surveillance has been one of the hottest political stories in years. Now, the producers of the James Bond series plan to bring it to the big screen.

Michael G. Wilson and Barbara Broccoli will team with Sony Pictures to make a movie after the company bought the rights to journalist Glenn Greenwald's new book No Place to Hide: Edward Snowden, the NSA, and the US Surveillance State. (Via The Wrap, Barnes and Noble)

According to The Verge, the book recounts Greenwald's time working as Snowden's primary contact, including the release of NSA documents and even delves into talks about government surveillance. All kinds of spy stuff. Perfect fit, right?

And, though it's unlikely movie-goers will see the familiar Walter PPK bullets fired across the screen, or martini's shaken but not stirred, its definitely sparked some intrigue. (Via Columbia Pictures / "Skyfall")

Quoted by Entertainment Weekly, Columbia Pictures – a branch of Sony – said its eager to shine the spotlight on the much buzzed about issue of privacy. “Edward Snowden’s explosive revelations have raised important questions about the role of government in protecting its citizens and the balance between national security and personal freedom. ... Glenn’s account of this incredible international event will make for a gripping and unforgettable film.”

There's "Zero Dark Thirty," "Captain Phillips," and "The Social Network," though The Wall Street Journal points out one flop in the bunch. "The Fifth Estate," which was – yep – all about Wikileaks founder Julian Assange who's closely tied to Snowden. So, who knows if a spy flick will work this time around. (Via Wikimedia Commons / Cancillería Ecuador, TheWikiLeaksChannel)

Regardless, Greenwald is excited Sony is shining the spotlight on his book. He's quoted by Mashable saying, "Growing up, I was heavily influenced by political films, and am excited about the opportunity to be part of a political film that will resonate with today's moviegoers." (Via Mashable)

And, he has every reason to be. Greenwald's reporting on the NSA survillenace and leaked U.S. documents helped both The Guardian and The Washington Post win the Pulitzer Prize for Public Service.

Sony PIctures has yet to lay out any details about the film or a timetable for production.