Donald And Shelly Sterling Open Up About Racism Scandal 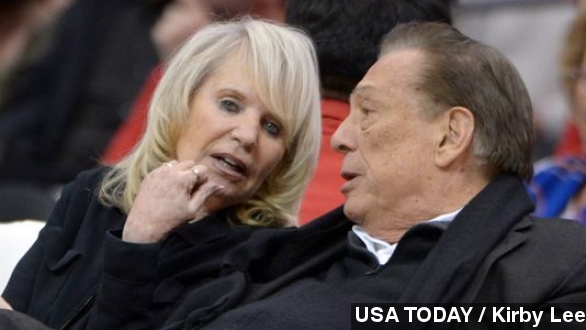 SMS
Donald And Shelly Sterling Open Up About Racism Scandal

By Steven Sparkman
May 11, 2014
Both Shelly and Donald Sterling spoke to major news networks to give their side of the story and discuss the future of the Clippers.
SHOW TRANSCRIPT

Donald and Shelly Sterling are speaking out. The estranged couple gave interviews to two different news networks in an attempt to tell their sides of the story — and the future of the Los Angeles Clippers.

On Sunday, ABC aired part of an exclusive interview in which Shelly told Barbara Walters she plans to eventually divorce Donald, and will fight the NBA if the league tries to make her sell her half of the franchise.

“I’ve been with the team for 33 years, through the good times and the bad times. And it’s my passion and I love it.” (Via ABC)

This comes less than two weeks after NBA commissioner Adam Silver banned Donald Sterling from the NBA for life, and said he would attempt to force a sale of the team.

No one is really sure whether or not the league will also go after the 50 percent stake in the team owned by Donald’s estranged wife Shelly. But her lawyer says if they do, it’ll lead to a huge legal battle.

“If somebody tries to tell her she has to sell the team, or tries to seize the team, look out for Shelly Sterling.” (Via CBS)

Meanwhile, Donald Sterling gave an exclusive interview with CNN’s Anderson Cooper in which he begged for forgiveness for his comments, saying “I made a terrible mistake. I'm here to apologize.” He also asked for another chance, saying “Am I entitled to one mistake, am I after 35 years? … It's a terrible mistake, and I'll never do it again.”

Donald Sterling has hinted he’ll fight the NBA if the other owners move to force a sale. An MSNBC analyst says this is setting up a huge legal battle that could drag on for years.

“Are we looking at some nasty three-way legal battle here between Donald, Shelly and the NBA?”

But there are more than just three pieces to the puzzle. There are also the players themselves.

Both Magic Johnson and Lebron James have said the players won’t support either Donald or Shelly, and that they want them both gone. Johnson told USA Today “It's hard to separate the two. ... It's going to be hard for them to sell that to the fans and definitely to the players.” (Via Sports Illustrated)

One thing Donald and Shelly both agreed on in their separate interviews: whatever Donald’s motivations were for making the racist comments, they both say he’s not racist.