Larry Wilmore To Replace Colbert With 'The Minority Report' 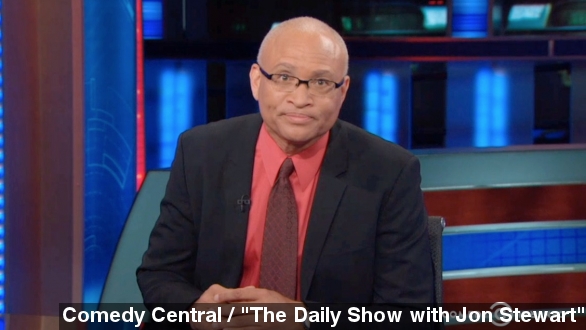 SMS
Larry Wilmore To Replace Colbert With 'The Minority Report'

By Christian Bryant
May 10, 2014
Wilmore's new show will take the place of "The Colbert Report" and will reportedly feature "a diverse panel of voices."
SHOW TRANSCRIPT

Jon Stewart: "So, this virulent racist is dating a woman of color."

Larry Wilmore: "Eh, I don't know if dating is the right word, Jon. He's more like a sugar-bigot."

With Colbert heading for the "Late Show," Wilmore will host "The Minority Report" — or is it pronounced "rapport"? — an aptly titled program considering this statement from Comedy Central. (Via Comedy Central / "The Daily Show with Jon Stewart")

"'The Minority Report with Larry Wilmore' will provide viewers with a distinct point of view and comedic take on the day’s news from a perspective largely missing in the current late night landscape. ... The series will feature a diverse panel of voices currently underrepresented in comedy and television."

Details on the show are scant at this point, but a writer for Mediaite says it'll mimic Fox News' "The Five" or MSNBC's "The Cycle" the way "The Colbert Report" takes inspiration from "The O'Reilly Factor"

That same writer says while Stewart and Comedy Central seek to add diversity to late night, there are risks involved in doing so: "By so blatantly making the show about race does Comedy Central risk sending the message to white people that this show isn’t for them? And, with Craig Ferguson’s spot on CBS still open, will that network feel less pressure to make a supposedly risky, non-white guy choice?" Only time will tell.

While the 52-year-old Wilmore has been Stewart's go-to guy for commentary on cultural affairs since 2006, he's also had success as a stand-up comic and as a TV writer.

Wilmore created the popular series "The Bernie Mac Show," which ran for five seasons. He also wrote for other shows like "In Living Color," "The Fresh Prince of Bel Air," "The Jamie Foxx Show" and "The Office."

"The Minority Report with Larry Wilmore" will debut on Comedy Central in January of 2015.