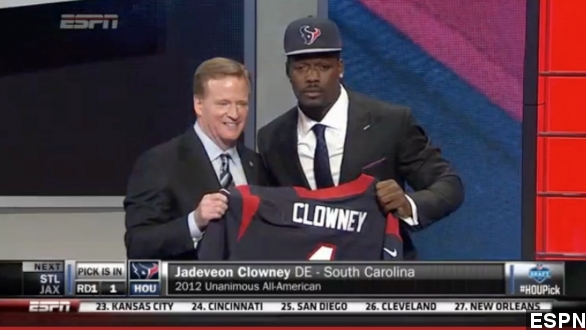 By Christian Bryant
May 8, 2014
Former Texas A&M quarterback Johnny Manziel fell to the 22nd pick in the 2014 NFL draft. But that wasn't the first round's only surprise.
SHOW TRANSCRIPT

Unpredictable? Yes. Surprising? Well, more so than we thought it’d be! Here’s our recap of first round action from the 2014 NFL Draft.

The Houston Texans picked up Jadeveon Clowney from the University of South Carolina as their number one pick. That’s the 6’6”, 266-lb dude who wowed scouts with a 4.53 40-yard dash. (Via ESPN)

NBC reports Clowney is the first defensive player to go number one in the NFL Draft since 2006 and only the second number one pick in South Carolina’s history.

Maybe one of the biggest stories of the night is former Texas A&M quarterback Johnny Manziel unexpectedly falling all the way to number 22.

But Manziel looked unfazed, saying, “I truly believe Cleveland was where I was supposed to end up.” Good form. (Via Twitter / @SportsCenter)

So, no, the Internet did not crash and the world did not explode as many thought it would had Manziel — the most talked about player in this draft — aligned with Jerry Jones and gone to the Cowboys.

But, if you were on Twitter, you would’ve known Manziel wasn’t getting picked by the Cowboys. Actually you would’ve known most picks before they were announced thanks to NFL insider and CBS Sports reporter Jason La Canfora. (Via Twitter / @JasonLaCanfora)

This comes after Awful Announcing reported last Sunday that NFL Networks and ESPN reporters were going to stray away from pre-reporting selections. No CBS Sports mentioned there.

But in all fairness, La Canfora did tweet ahead of time that he’d be tweeting spoilers. So, there. (Via Twitter / @JasonLaCanfora)

But the draft isn’t just about who goes where. It can also be pretty insightful in terms of who these guys are.

​Take for instance Jake Matthews who comes from a family of BEASTS. He’s the seventh person in his family to go to the NFL. (Via Twitter / @samcmlaird)

And he’s related to this guy — Clay Matthews. (Via Gillette)

Also, did you know Manziel isn’t the only Texas A&M player with ties to Cash Money? You might’ve spotted Cash Money’s Slim standing next to Evans during the draft and wondered, “What the what?”

Well, Evans is reportedly working with Cash Money Sports. The record label with artists such as Lil Wayne, Drake and Nicki Minaj is apparently trying to get into representing athletes. (Via TMZ)

Thursday’s action might’ve given us the first live shameless plug. Roger Goodell deflected some boos using NFL HOF’er Barry Sanders during the Detroit Lions’ number 10 pick when Sanders announced fans have the opportunity to choose who will be on the cover of Madden NFL 15 from EA Sports. (Via Twitter / @BleacherReport, EA Sports)