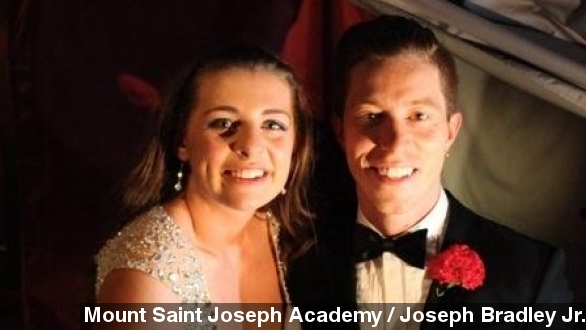 SMS
Olympic Medalist Shaun White Crashes High School Prom
By Alexis Rogers
By Alexis Rogers
May 4, 2014
A Pennsylvania senior made a video asking the snowboarder to be her prom date, but was surprised when he actually accepted.
SHOW TRANSCRIPT

People are getting creative with their prom–posals lately. Pennsylvania senior Carly Monzo’s dream date came true after she put together a witty video for her celebrity crush, U.S. Olympian Shaun White.

“Please pardon this interruption, we have some shocking news: Shaun White has never been to prom.” (Via Vimeo / Carly Monzo)

In March, Monzo made this video for White in an effort to woo him to go to prom with her.

Well, Monzo’s video was a success, and on Friday White surprised her onstage at the dance with his band “Bad Things.” The school administration was in on the whole thing. (Via ESPN)

But Monzo is one of the few lucky ones. There are plenty of failed celebrity prom requests out there.

“So Kate will you go to prom with me?” (Via YouTube / Talia Myers)

"I promise you it will be the best night of your life and if you're not the slow dancing type no worries I go to public school and grinding is allowed.” (Via YouTube / Matt Peterson)

Or when this guy got suspended for asking Miss America to prom. (Via ABC)

Of course, many celebrities have said yes, too: Jason Derulo, Katy Perry & Dwyane Wade, to name a few. (Via The Huffington Post)

But a writer for Yahoo says the "asking celebrities to prom" trend isn't exactly fair.

"Putting anyone, famous or not, on the spot in such a public way puts a lot of pressure on someone to say yes, even if they don't want to."

None the less, Monzo got her wish.

Plus, it was a big first for the band, too. They tweeted at Monzo, “Most of us have never been to prom . Thanks @carlymonzo #Shaunsaidyes #promcrashers” (Via Twitter / Bad Things)

And what about Monzo's date? Well, it looks like he didn't mind being kicked to the curb for the Olympic snowboarder.

According to KYW-TV, Monzo said “her original prom date was a good sport about the whole thing and he was kind of excited to be upstaged by Shaun White.”

Congratulations to Monzo and our condolences to her date. Better luck next time.