Obama, McHale Bring Down The House At #WHCD 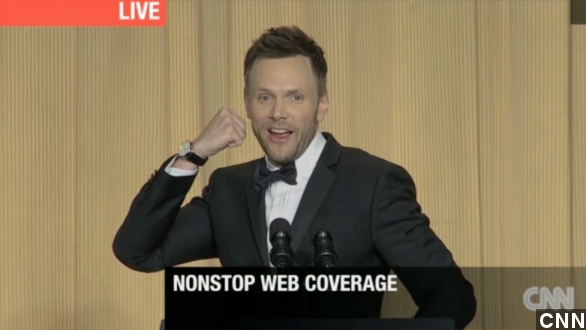 SMS
Obama, McHale Bring Down The House At #WHCD

"I am happy to be here, even though I am a little jet-lagged from my trip to Malaysia. The lengths we have to go to to get CNN coverage these days." (Via The White House)

What began as a small, select gathering of White House journalists in 1921 has transformed into four days of fancy parties and star-studded red carpets, where celebrities, politicians and journalists all gather in D.C. to let their hair down for a weekend. (Via C-SPAN)

This year’s festivities saw appearances from celebrities like Lupita Nyong'o, Mindy Kaling, and “The Roots” musician Questlove. (Via Instagram / wapostyle)

But compared to past dinners, the guest list was a little light on A-list celebrities this year. The Washington Post reports event organizers are looking to tone down the celebrity appearances this year and focus on the correspondents.

The dinner opened with a retrospective video produced by the History Channel, highlighting the 100 years of White House press coverage. And then things got a bit … surreal.

SELINA MEYER: "What the hell are you doing?"

WHCA President Steven Thomma then handed out several journalism awards. Reporters from CNN and Politico were recognized for excellence in covering the president, while The New York Times and CBS News journalists won an award for deadline coverage. The prize for coverage of issues of national significance went to Reuters and a partnership between the Center for Public Integrity and ABC.

And in honor of their centennial, the WHCA gave a special President's Award to National Journal’s White House correspondent, George Condon Jr.

And then the President himself took the stage for some comic relief, riffing on everything from his presidency to cable news to current events to his fellow politicians.

"House Republicans actually give John Boehner a harder time then they give me. Which means orange really is the new black."

Joel McHale, of “The Soup” and “Community” fame, followed the president as the evening’s entertainment, and got in a few good jabs at the President’s botched healthcare.gov rollout. (Via E! / "The Soup")

"Look, I don’t even have an analogy because the website is now what other people use to describe other bad things. … 'Boy, that latest Johnny Depp movie Healthcare.gov’d at the box office.'" (Via CNN)

Proceeds from this year’s event went to the WHCA’s scholarship fund for journalism students.