Oprah, Mayweather And Everyone Else Who Wants The Clippers 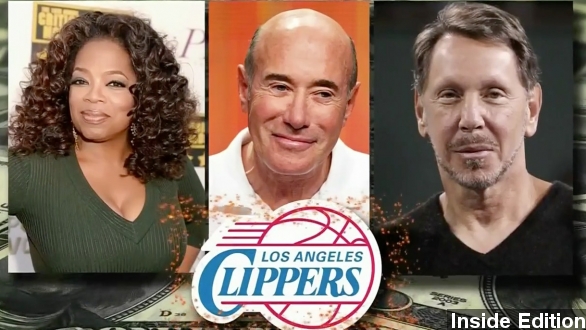 SMS
Oprah, Mayweather And Everyone Else Who Wants The Clippers
By Alexis Rogers
By Alexis Rogers
April 30, 2014
If Donald Sterling sells, who will be the next Clippers owner? Here's a rundown of all the people throwing their hat into the ring.
SHOW TRANSCRIPT

After the NBA banned Donald Sterling from the league for life, the big question now is: if Sterling sells, who will be the next owner of the Los Angeles Clippers?

“Oprah Winfrey, David Geffen and tech tycoon Larry Ellison, NBA Legend Magic johnson has been mentioned to but now seems to be backing out.” (Via Inside Edition)

That’s right, Lady O may be shelling out the big bucks for her own NBA franchise.

Oprah told CBS This Morning the whole situation “feels like a plantation mentality in the 21st century, in 2014. It just doesn’t fit.”

ABC points out, if Oprah did buy the Clippers, she would be on of the only female owner of an NBA team outside of Jeanie Buss — who is part owner of the Los Angeles Lakers.

That’s definitely not the end of the list though. BET reports hip hop moguls Diddy and Rick Ross both want in.

Another interested heavy hitter? None other than boxing great Floyd Mayweather.

“We'll keep the Clippers right where they're at. When I'm not boxing, I'm at the games all the time. Me and my team do want to buy the Clippers and we can afford the Clippers." (Via Fighthype)

Although Sterling insists he is refusing to sell, Adam Silver announced Tuesday he would like the owners to force him to out. (Via NBA)

But buying the Clippers will be no small task — they come with a pretty hefty price tag.

“The bankers that I’m talking to say that this is very easily a $1 billion team. ….  if what you’re saying is correct it would put the clippers among the Bulls, Lakers and Knicks as the only teams valued at $1 billion or above.” (Via ESPN)

But a Forbes analyst told CNBC if Sterling doesn't sell soon, that value will start to drop.

"If he fights it and tries to hang on, more sponsors are going to stay away, season ticket holders won't renew and the value of the team will plummet." (Via CNBC)

One person likely to not be on the list: Shelly Sterling. Although she owns half the team, analysts say it's unlikely her husband would be allowed to sell full control to her.