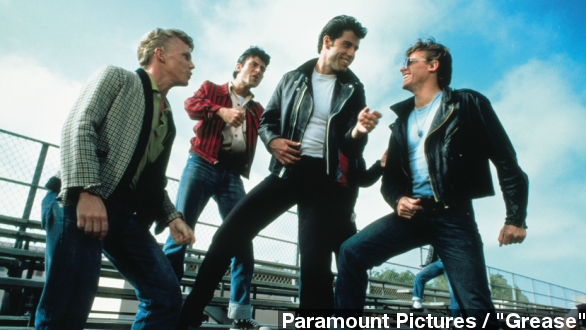 SMS
Fox To Broadcast New 'Grease Live' Musical In 2015
By Jake Godin
By Jake Godin
April 28, 2014
Following NBC's "The Sound of Music Live," Fox has apparently decided to get in on the musical action.
SHOW TRANSCRIPT

There's a new word at Fox — Grease. Yup, first there was NBC's "The Sound of Music Live" and now Fox has picked up "Grease" for a three-hour live broadcast on their network.

Currently titled "Grease Live," the musical will be based off the 1971 Broadway musical, which also inspired the 1978 hit movie starring John Travolta and Olivia Newton-John. (Via Paramount Pictures / "Grease")

The Hollywood Reporter notes the resurrection of Paramount Picture's television division is what allowed the Fox/Grease deal to be struck and quotes its president saying, "Fox's passion for engaging audiences with bold storytelling and live musical formats make it a perfect home for this special broadcast."

USA Today quotes an excited senior Fox rep saying, “From Broadway to film, and across generations, ‘Grease’ is one of the most beloved musical stories ever told -- and we can't wait to bring it to our air in a spectacular live event."

Considering how well "The Sound of Music Live" did on NBC and that they picked up "Peter Pan Live!" for this December, it's unsurprising that Fox decided to pick up "Grease". wasDASD

According to an Entertainment Weekly article, the NBC musical drew in almost 22 million viewers when including DVR playback. That's quite a few eyeballs, and it looks like Fox noticed.

Cinema Blend does note that it's interesting Fox chose to use words like "young" and "new generation" in their announcement saying their choice to go with Grease is "an indication that they're less concerned about including a wide range of ages and more about targeting the younger demo."

So far there is no word on which actors will be cast but the musical will reportedly be airing sometime in 2015.