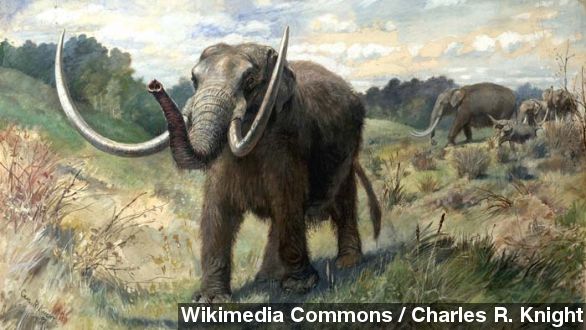 SMS
Mich. Boy Unearths 10,000-Year-Old Mastodon Tooth
By Amy Kluber
By Amy Kluber
April 20, 2014
A 9-year-old Michigan boy was exploring a creek when he came across a 10,000-year-old tooth from a prehistoric mastodon.
SHOW TRANSCRIPT

Mastodons have been extinct for thousands of years now, but one Michigan boy still managed to find a Mastodon tooth near his house last summer.

These giant mammals are related to elephants and similar to mammoths. They roamed North and Central America before the species' mass extinction 10,000 years ago. (Via Discovery)

Nine-year-old Phillip Stoll was exploring a creek with a friend when he came across an 8-inch-long object with six peaks. Phillip and his mom first thought the find was a car part or misshapen rock. (Via WILX)

After some research, they determined it could be a mastodon tooth. The Detroit Free Press reports that's when they searched for a reptile and amphibian expert and came across Jim Harding, who has recently confirmed it to be a prehistoric tooth.

According to the Lansing State Journal, Harding says the remnant is the top portion of a tooth from the giant elephant-like Mastodon which probably got stuck in a swamp and drowned thousands of years ago.

Phillip has been nicknamed "Huckleberry Phil" in his neighborhood for his love of exploring the outdoors barefoot. He tells CNN the discovery has inspired him to follow his dream of becoming a paleontologist.

Now the fossil is used in the  ​Stoll household to teach Phillip's six siblings about the ancient creatures during their homeschooling. (Via HLN)

Back in 2012, two 11-year-old boys found a 13,000-year-old Mastodon axis bone while fishing for crayfish in a stream near their homes. (Via The Advisor & Source)