App Fights Jet Lag With The Power Of Math 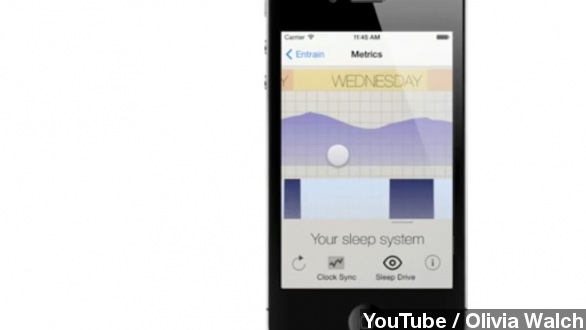 SMS
App Fights Jet Lag With The Power Of Math

By Matt Picht
April 13, 2014
Researchers at the University of Michigan have designed an app to fight jet lag by adjusting your body's light intake.
SHOW TRANSCRIPT

If you're a globe-trotting frequent flier, you know how painfully irritating jet lag can be — losing sleep, headaches, fatigue, and other general awfulness. Fortunately, there's now a more efficient way to fight jet lag — math.

Researchers at the University of Michigan have just released Entrain, a free iPhone app which is designed to beat jet lag by keeping track of how much your body takes in during different times of the day. (Via YouTube / Olivia Walch)

The app is based on research published this week in PLOS, which focuses on the daily cycle of light exposure our body expects to get, and details mathematical formulas for tweaking that light exposure.

App designer Olivia Walch told the Los Angeles Times, the result should be a quicker rehabilitation from the effects of jet lag. "These are the fastest schedules that have ever been proposed. ... Our schedule takes what could be 12 days of adjusting down to four."

Of course, Entrain's mathematical models are still theoretical at this point. Entrain's developers are asking users to submit feedback on how well the schedules work for them, so they can adjust the app. (Via University of Michigan)

But one sleep researcher at Harvard Medical School is optimistic about the app's effects. She told NPR the formulas behind Entrain are backed up by years of research.

"You need to do experiments to make sure whether it works, because humans don't always respond the way mathematical models expect them to. ... But he has based his model on decades of thorough experiment, and a model that has been tested very thoroughly."

Entrain is currently only available for iOS, but the developers say an Android version is in the works. And if you're smartphone-averse, all of the tables used in the app can be found in the team's published research at PLOS.