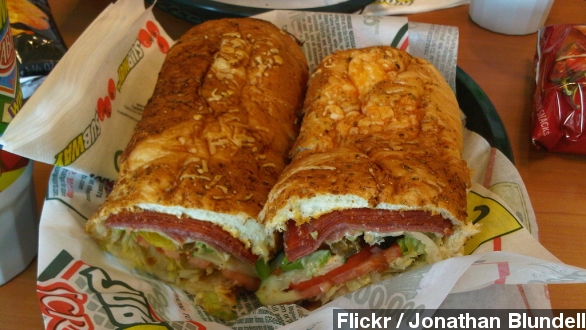 After facing two months of consumer backlash, Subway announced Friday that starting next week their bread will be officially free of the infamous "yoga mat" chemical.

Subway's sandwich bread used to be made with azodicarbonamide, a chemical which strengthens and textures dough. Although the chemical is banned in Europe and Australia over health concerns, the FDA does allow small amounts of azodicarbonamide to be used in food. (Via CBS)

Food blogger Vani Hari first raised the issue with Subway back in February, noting the chemical is also used for creating foamed plastics like yoga mats and shoe soles. Hari started a petition which drew over 95,000 signatures, calling for Subway to remove the chemical. (Via Food Babe)

In the face of this backlash, Subway told consumers it was already in the process of phasing the yoga mat chemical out of the bread recipe. And Friday a Subway rep confirmed the chemical should be gone from all Subway resturants by next week.

But Hari still isn't impressed with the restaurants' new bread formula. She told NBC Subway's still off the menu for now.

"The FDA is allowing thousands of chemicals in our food that haven't been tested in three decades and we don't know their cumulative effect. ... It takes five ingredients to make bread. When they start doing that, that's when I'll start eating there again."

And consumers looking to avoid the yoga mat chemical might have a hard time. The Environmental Working Group notes azodicarbonamide is used in at least 500 different food products.