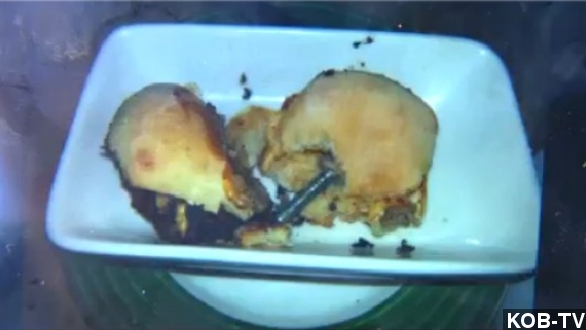 By Lauren Zima
April 8, 2014
A woman at an Albuquerque Applebee's snapped a picture of the slider; luckily she was OK.
SHOW TRANSCRIPT

Not exactly something you want inside you. An Applebee's customer in Albuquerque says she bit into a slider, and her teeth hit a sizable metal bolt.

​"She bit into it and got a funny look on her face, and we said, 'What's wrong?' She kind of pulled the slider out of her mouth a little bit and there's this bolt."

"You heard her right: a metal bolt."

"It was embedded in the meat."

KOB-TV reports the Applebee's did comp the family's meal, though the family argues that location should have stopped selling sliders then and there. Apparently other people were still served the same meat.

Luckily, the customer was OK. The Consumerist was able to make a little joke here — that she got a free metal bolt with her burger.

But when stories like this one make headlines, we're always reminded of the nasty, surprise-filled-food past.

Like when this person claimed to have found a screw inside their Moe's burrito. (Via Blisstree.com)

Or this guy, who chipped his tooth on a bolt he found in his soup at Outback Steakhouse in 2008. (Via Naples Daily News)

"In the third spoon that I put in my mouth was a large industrial bolt."

Definitely a reason to bolt. We would get into some other "weird item found in food" stories, but it's a lot of mice, and it's gross. As for this story, Applebee's did tell KOB-TV it's investigating, and doesn't think the bolt came from within the restaurant.