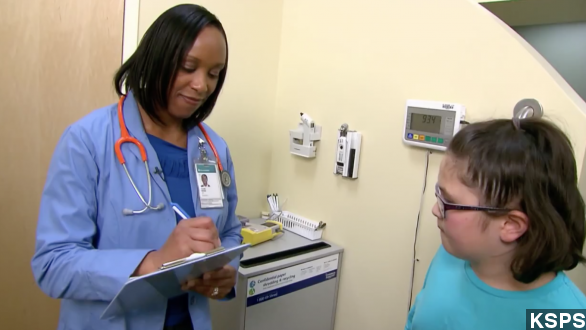 As if we needed another reason to stay in shape. Now a recent study suggests losing those extra pounds during childhood could save thousands in extra medical costs later down the road.

According to new findings published in the journal Pediatrics, an obese 10-year-old's medical costs could rise as much as $20,000 over a lifetime compared to kids of healthier weight.

USA Today reports when that number is multiplied by the 20 percent of U.S. children who are obese, medical costs over a lifetime amount to a total of about $14 billion combined.

The Duke researchers say even normal-weight children who become obese later in life will see their medical costs increase by almost $13,000. (Via HBO / "The Weight of the Nation")

But those figures account for only direct medical costs like medication, and don't include indirect costs such as quality-of-life issues, which could actually add to those numbers.

The study cites a need to target childhood obesity to address obesity in adults, one third of which are obese in the U.S. (Via WSB-TV)

According to the Centers for Disease Control and Prevention, obese children are more likely to develop conditions both in the short and long term. Those conditions include cardiovascular disease, type 2 diabetes and some cancers.

Time quotes the study's lead author who said, "reducing childhood obesity is a public-health priority that has substantial health and economic benefits."

The researchers suggest decreasing or eliminating those extra medical costs related to obesity can be done if kids can keep the weight off by forming healthy eating habits. (Via KSPS)

But getting there isn't exactly easy, especially with the prevalence of sugary, processed foods many kids consume today.

A health professional tells HealthDay: "We didn't see this kind of obesity 25 years ago. It's not only about personal and family responsibility. Society needs to change."

The overall obesity rate in the U.S. has not changed during the past decade, but it is notable in toddlers aged 2 to 5 it's dropped 43 percent.