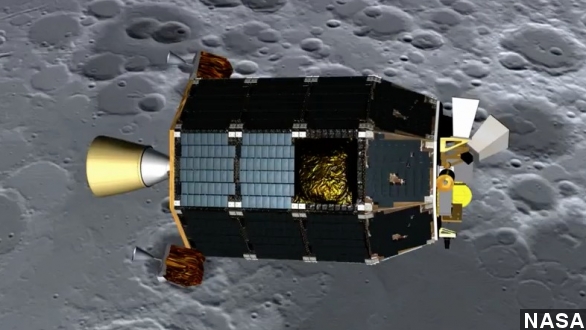 By Christian Bryant
April 5, 2014
A Norwegian skydiver has a near miss with a meteorite and the moon has a busy month ahead. Here's a look at this week's space news.
SHOW TRANSCRIPT

A Norwegian skydiver had a close encounter with a falling object, the "Blood Moon" cometh and NASA wants you to guess when the moon will get a new crater. Here's a look at what's happening in the skies above.

Let's start relatively close to home, at almost 13,000 feet above earth, where a skydiver wearing a wingsuit captured something never-before-seen on video — what's believed to be a plummeting meteorite mid-flight. (Via NRK)

The skydiver told the Norwegian public broadcasting company he watched the falling object on video and initially dismissed it as just a rock tucked into his parachute. But after further review, he said it was too big for that.

According to Universe Today, the video was recorded back in 2012 but was kept a secret for two years so volunteers and other researchers could locate the meteorite. So far, no dice.

There's still a chance that the whole thing could be a hoax — because, you know, lies on the Internet — but researchers seem to agree the video is legit. An astrophysicist told Universe Today the video was released to the public in hopes that more people will help look for the meteorite.

If we travel past our own atmosphere about 240,000 miles, we'll find our moon getting ready to put on a show. With lighting help from the Sun and shadowing from the Earth, people in North America will soon get a look at a total lunar eclipse. (Via Time and Date)

"The action starts on April 15 when the full moon passes through the amber shadow of Earth, producing a midnight eclipse visible across North America. That night marks the beginning of a lunar eclipse tetrad." (Via NASA)

A tetrad is a series of four lunar eclipses that'll occur six months apart. That's good news for star watchers since the last lunar eclipse visible to North America was in 2011.

A writer at EarthSky explains the moon gets its blood-red glow from the Sun's rays passing through Earth's atmosphere. As the moon becomes submerged in the Earth's shadow, the refracted sunlight projects onto the moon making it all pretty and stuff.

A writer at USA Today says some Christians believe the lunar tetrad coincides with an end-times prophecy. For astronomers and other observers though, April 15 will present a pretty good time to whip out those binoculars and telescopes to get a look at a rare astronomical event.

April's going to be a busy month for the moon. The folks over at NASA predict that the Lunar Atmosphere and Dust Environment Explorer, or LADEE, will crash into the lunar surface. Who's driving that thing anyway?

Space.com reports the LADEE spacecraft has been studying the moon's atmosphere and lunar dust environment since October, but now it's time to go out with a bang.

A LADEE project scientist said at a news conference the spacecraft will smash into the moon going about 5,250 feet per second, but they don't know exactly when that'll happen.

So, they're leaving it up to you, space fans. NASA created the "Take the Plunge" Challenge where you can guess the date, hour and minute of impact for a chance to win a "commemorative, personalized certificate from the LADEE program."

Yeah, the prize sounds kind of lame but since your NCAA bracket is busted and you don't have anything else to do ... why not give it a shot? Thanks for watching.