Mars Shines Brighter Than It Has In Six Years 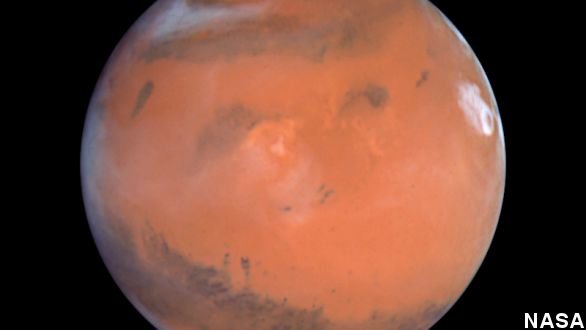 SMS
Mars Shines Brighter Than It Has In Six Years
By Amy Kluber
By Amy Kluber
April 5, 2014
Mars will be the closest to Earth its been in six years. The planet will shine brighter and bigger than usual all month long.
SHOW TRANSCRIPT

Mars can usually be faintly seen from Earth in the night sky, but this month many will be able to see the planet shine even brighter and bigger.

According to NBC, the distance between Earth and Mars changes dramatically as they orbit around the sun, sometimes separated by as many as 250 million miles. But now that gap will shorten to 57 million April 14.

Mars will be the closest it's been to Earth in more than six years. Although the Red Dwarf can be seen at its shinier state all month long, April 8 is when it will align directly opposite the sun — allowing greater visibility to the planet's markings and polar cap. (Via NASA)

And it looks like Mars isn't the only planet getting the spotlight this month.

EarthSky says you will also be able to see Jupiter, Saturn and Mercury for a few days in the evening skies.

Those planets won't stick around as long as Mars will, but Jupiter will shine even brighter than Mars when it passes near the moon this weekend. (Via NASA)

Of course, you'll need a telescope if you want to see all the fine details on Mars' surface.

​But for those who don't have the tools and want to see Mars shine, The Virtual Telescope will provide real-time images April 8.