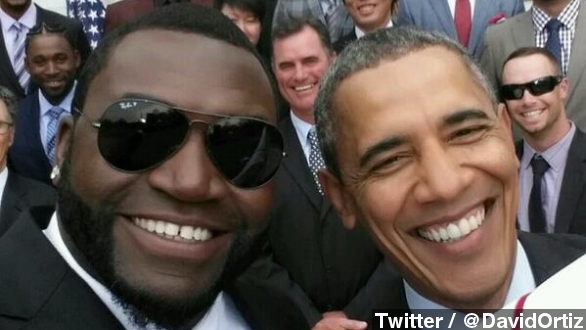 Ellen's selfie from the Oscars had its 15 minutes in the limelight. Now, another Samsung selfie got a little presidential with Red Sox slugger David Ortiz Tuesday. Take a look.

DAVID ORTIZ: "Mind if I take my own?"

BACKGROUND: "Cha-ching!"  (Via The White House)

That's when it happened. What seemed like a fun moment quickly turned into accusations of corporate greed — because 'Murica.

Turns out, Ortiz signed an endorsement deal with Samsung to be a "social media insider," according to Sports Business Daily. In fact, this March 31 article reads, "So when the Red Sox visit the White House this week to commemorate their World Series victory, 'Big Papi' will be tweeting and sending photos on Samsung’s behalf."

Then came the media backfire. Mashable called the selfie "a Samsung-branded stunt," and ABC's headline read a little more than accusatory against Ortiz and the brand. Watch Huffington Post jokingly get in on the action.

"It looked like a fun, spontaneous moment. Turns out, it was all a fake. ... I feel duped here. I mean, I really believed in that selfie."

"Typical Obama, man, selling out to the big corporations." (Via Huffington Post)

Soon, White House Press Secretary Jay Carney was called into the mix. And he was not happy.

He told The Wall Street Journal: "As a rule the White House objects to attempts to use the president’s likeness for commercial purposes. And we certainly object in this case.” He did not say if White House lawyers were involved.

So, the big question: was the selfie fake or not? Samsung explained in a statement that the brand had worked with Ortiz about sharing images with fans before the White House visit, but it was not certain what he would be able to capture. Hmm...

For what it's worth, a Boston Globe reporter is convinced the selfie was spontaneous after asking Ortiz up-front if he was paid for it. Ortiz responded: "No way, man. ... I thought, really at the last second, maybe I should snap a shot with my phone while I have the chance.​ It had nothing to do with no deals.”

Is it too early to call it #SelfieGate2014? Let us know if you think it was real or put-on in the comments below.