Why Do Zebras Have Stripes? Scientists Blame Bug Bites 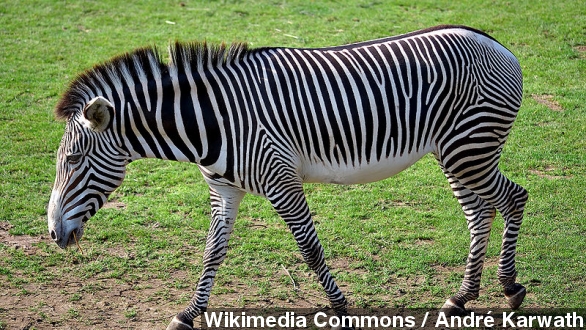 SMS
Why Do Zebras Have Stripes? Scientists Blame Bug Bites
By Collin Ruane
By Collin Ruane
April 2, 2014
Ever wondered why zebras have stripes? Well, the researchers behind a new study think they have a pretty good answer to that question.
SHOW TRANSCRIPT

Ever wondered why zebras have stripes? Well, the researchers behind a new study think they have a pretty good answer to that question.

"California scientists say the animal's black and white pattern helps keep flies away by disrupting their vision and making it difficult for them to land." (Via WMAQ)

"Apparently zebras are really susceptible because they have short hair."​ (Via WHDH)

The study was published in the scientific journal Nature Tuesday.

In their summary, the scientists say they came to their conclusion after they couldn't find consistent evidence showing that the stripes could be used as camouflage or helping control "heat management." (Via YouTube / Rachelle Zukerman)

National Geographic notes scientists have been trying to figure out the mystery of why zebras have their stripes for more than a century. The scientists in this most recent study used statistics to find their information rather than observations.

But a scientist from UCLA told USA Today statistics aren't enough: "We really need to know what happens with live zebras in the field before we can be sure."

Even without those observations, the scientists say the statistics provided pretty strong evidence.

A biologist who worked on the study told NBC: "I was surprised myself to see, again and again and again, greater intensity of striping on species and subspecies where we have this biting fly annoyance for months."

The study also found zebras that lived in areas with more aggressive bugs tended to have more stripes. (Via University of California Davis)