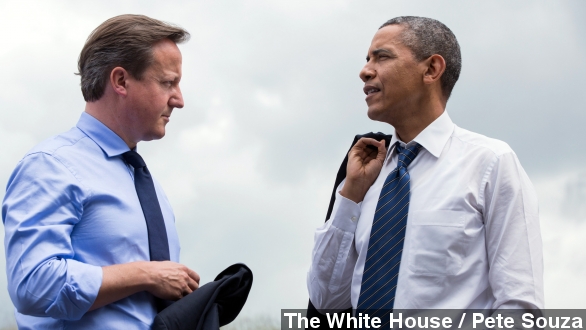 SMS
Newly-Formed G7 Isolates Russia For Crimea Actions
By Zach Toombs
By Zach Toombs
March 24, 2014
Heads of state for the U.S., U.K., Germany, France, Italy, Canada and Japan shunned Russia and moved their next meeting out of Sochi.
SHOW TRANSCRIPT

Isolated on the international stage, Russia and its president, Vladimir Putin, will be left out of June's G8 Summit, a meeting originally planned to take place in Sochi. (Via The White House / Pete Souza)

Instead, leaders of the newly-formed G7 said Monday they would meet in Brussels and Russia would not be included. In a statement, heads of state for the U.S., United Kingdom, Germany, France, Italy, Japan and Canada said they "strongly condemn Russia's illegal attempt to annex Crimea ... [and] reaffirm that Russia's actions will have significant consequences."

By all practical standards, Russia now controls Crimea. That's the southeast region of Ukraine that voted in a referendum more than a week ago to join Russia, though Europe and the U.S. say that vote was illegitimate. (Via BBC)

Ukraine's government says it's pulled the last of its troops out of Crimea. Now, NATO commanders warn Russia has forces along Ukraine's eastern border large enough to overrun the eastern half of the country. (Via Google Earth)

This marks the first time since Russia joined the G8 in 1998 that it will be excluded. In the past two weeks, the U.S. and European Union have sanctioned Putin's inner-circle and cut many trade ties as economic punishment for the occupation.

President Obama, who has levied harsher economic sanctions against Russia than any other world leader, said more penalties are on the way if Putin doesn't back down.

​OBAMA: "Europe and America are united in our support of the Ukrainian government." (Via ABC)

Also on Monday, Russia's economic ministry said inflation was spiking and investment in Russian businesses had ground to a halt. Putin has not yet responded to Monday's G7 statement.